The victims said that they were severely beaten, cut and their fishing gears confiscate

Fighting between Nile Perch and Silverfish fishermen has erupted on Lake Victoria in Lyabaana sub-county in Buvuma District.

Silverfish fishermen from Ziiru landing site in Lyabaana sub-county who have been mostly injured in these fights allege that they are being assaulted by Nile Perch fishermen from Lyabaana Landing Site.

Others were Lima Nasulu and Rajab Joga who were admitted at Buvuma Health Centre IV for treatment.

The victims said that they were severely beaten, cut and their fishing gears confiscated by the gangs who accused them of fishing in the side which was forbidden by the Buvuma Resident District Commissioner (RDC), Kyeyune Ssenyonjo.

Following the injuries that the victims sustained, Ziiru village chairman, Gerald Buule said that they solicited fuel and took them to Kawolo Hospital for treatment.

The fishermen allege that the genesis of these fights is based on the directive made by Ssenyonjo which ordered the two parties to fish at separate parts of the lake for three months.

Even though Ssenyonjo's directive was highly welcomed by the Nile perch fishermen who accuse the silverfish fishermen for illegal fishing, the other group objected it and alleged that he was influenced to oppress them.

When contacted in a phone call, Ssenyonjo said the two parties had earlier started fighting on the lake and he wanted to separate them for a while as the district security committee looked for a long term solution to their problems.

Silverfish fishermen cited Abdul Karim Njuubi, a prominent Nile Perch fisherman from Lyabaana Landing Site and others that they are the ones fuelling the gangs who are terrorizing them on water. 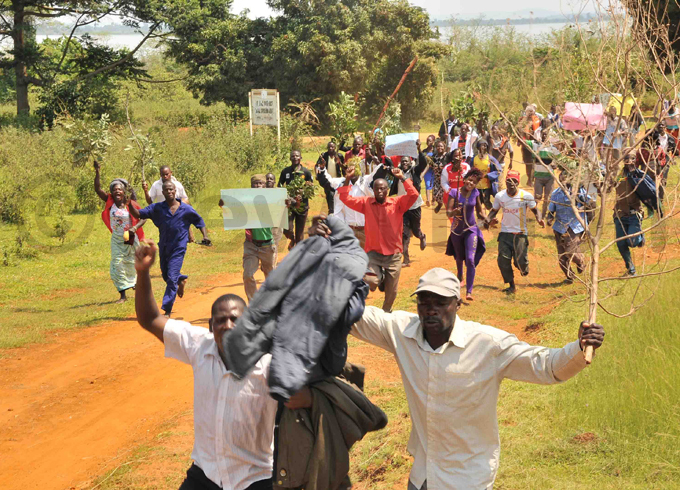 Ssezibwa Region Police Commander (RPC) Bob Kagarura said the condition has been blown out of proportion and promised to visit the islands to calm the situation.

Kagarura confirmed the fights that happened on Sunday night at Lyabaana which left some of the individuals cut.

He also promised to arrest the culprits and charge them in the courts of law.

Buvuma district Police commander Rogers Cheben on Friday said Police had already got names of the people suspected of terrorizing the fishermen.

Silverfish fishermen in protest to the RDC's directive first abandoned fishing for a number of weeks and last week stormed the district headquarters on Thursday and Friday which prompted the commissioner for fisheries, Edward Rukuunya and the director of Research for National Fisheries Resources Research Institute (NAFIRRI) Dr. Anthony Taabu to meet them.

Taabu condemned the fishermen's culture of illegal fishing saying it is the reason as to why they are now fighting because the fish in Lake Victoria got depleted as a result of poor and illegal fishing methods.

However, Rukuunya invalidated the RDC's directive saying the lake cannot be with boundaries. He asked the two parties to fish in the same locations but respect each other while on water.