The most affected models in Toyota's recall include its Prius hybrid and luxury Lexus, with the vehicles mostly sold in Japan, North America and Europe. 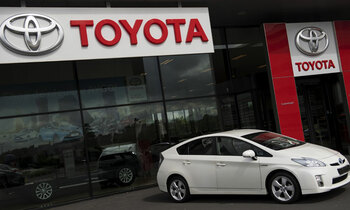 Toyota said on Wednesday it is recalling 3.37 million vehicles globally over a pair of defects, in the latest hit for a Japanese auto industry hit by fuel-efficiency scandals and an exploding airbag crisis.

The most affected models in Toyota's recall include its Prius hybrid and luxury Lexus, with the vehicles mostly sold in Japan, North America and Europe.

About half of the recalled vehicles, built between 2008 and 2012, have a problem with passenger and driver-side air bags that could see the safety device partially deploy and create the risk of injury, Toyota said.

The firm said the airbags in question are not made by Japanese auto parts giant Takata which is embroiled in an airbag defect scandal linked to at least 13 deaths and scores of injuries globally.

The other defect is tied to problems with a fuel emission control unit that could lead to cracks developing in the unit, Toyota added.

"As a result of this condition, the cracks could expand over time and, eventually, fuel may leak from these cracks when the vehicle has a full tank of gas," it said.
No injuries have been reported in relation to either defect, it said.

About 2.87 million Toyota and Lexus brand cars are being recalled over the fuel tank defect, Toyota said, noting that some vehicles are subject to both recalls.

Japan's auto industry has been hammered by the Takata crisis and fuel-efficiency scandals involving Mitsubishi Motors and small-car maker Suzuki.