The soldiers have completed a year's tour of duty in Somalia 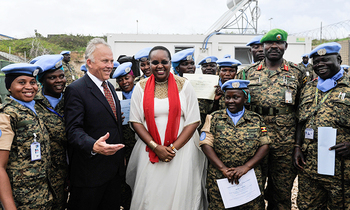 The Deputy Special Representative of the Chairperson of the African Union Commission (DSRCC) for Somalia, Lydia Wanyoto has commended the Ugandan United Nations battalion in Somalia for its exemplary work.

Wanyoto was speaking at a medal awards ceremony for the soldiers from the UN Guard Unit (UNGU), held in Mogadishu.

"The relationship between UNGU and AMISOM has only grown in strength and better. We feel more secure and better organized in the way we manage our security here which, reflects even in the way of securing the foregrounds and sector hubs, working as one family, building for Somalia, for Africa and the future," said Wanyoto.

The soldiers have completed a year's tour of duty in Somalia.

"For each one of you, congratulations. You have a well-deserved medal today. Even as you go back home to your families and to your country, that sent you here, remember that you have done Uganda proud and you have done Africa proud," added Wanyoto.

The ceremony was presided over by the Special Representative of the United Nations Secretary-General (SRSG), for Somalia, Michael Keating.

"What you are doing is really important. You are a very important part of a bigger effort to help Somalia find its feet. To find peace and security," he told the soldiers.

Also present at the ceremony was the acting AMISOM force commander Maj. Gen. Nakibus Lakara, who expressed satisfaction with the soldiers' achievements in Somalia.

"I am convinced, unless to the contrary, that UNGU II has performed exceptionally well," Maj. Gen. Lakara observed.