Money for nothing? Swiss vote on basic income for all

In a global first, the Swiss will on Sunday vote on a radical proposal to provide the entire population with an unconditional, basic income, or UBI, to fight poverty, 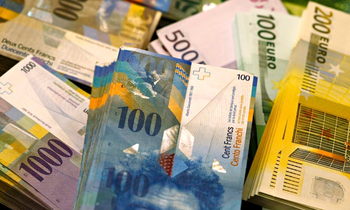 Carole, a scientist from Zurich, recently received a dream message on her phone: she will receive 2,500 Swiss francs ($2,500, 2,300 euros) a month for the next year, no strings attached.

The 30-year-old ethnologist, whose last name has not been revealed, could be the first of many in Switzerland to receive such monthly cheques in the mail.

In a global first, the Swiss will on Sunday vote on a radical proposal to provide the entire population with an unconditional, basic income, or UBI, to fight poverty, inequality and provide "a dignified" existence to all, according to campaigners.

The idea is controversial, to say the least. The Swiss government and nearly all the country's political parties have urged voters to reject the initiative -- advice 72 percent are inclined to follow, according to the latest poll.

But supporters of the initiative have already begun mobilising, raising enough money to showcase the idea by paying 2,500 francs a month for a year to a person chosen in a draw.

The winner, Carole, hailed her luck in a Youtube video, saying she planned to go back to school.

"It is an enormous relief to know I can study and have my income taken care of," she said.

UBI supporters would like all Swiss citizens to have the same support, as well as foreigners who have been legal residents for at least five years.

Critics have slammed the initiative as "a Marxist dream", warning of sky-high costs and people quitting their jobs in droves.

"If you pay people to do nothing, they will do nothing," Charles Wyplosz, economics professor at the Geneva Graduate Institute, told AFP.

Proponents reject that, arguing people naturally want to be productive, and a basic income would simply provide them more flexibility to choose the activities they find most valuable.

"For centuries this has been considered a utopia, but today it has not only become possible, but indispensible," Ralph Kundig, one of the lead campaigners, told AFP.

Sunday's vote will be on principle only, with the details of the amounts to be paid and financing to be determined later, if the initiative passes.

Discussions have centred around 2,500 Swiss francs a month per adult, and 625 francs per child.

That may sound like a lot, but it is barely enough to get by on in one of the world's priciest nations -- leaving plenty of incentive to work, campaigners say.

Those with jobs would also receive the basic income, but would see their salaries deducted by the same amount, in a move campaigners say would smooth out inequalities.

Authorities have estimated an additional 25 billion francs would be needed annually to cover the costs, requiring deep spending cuts or significant tax hikes.

Supporters of the initiative however suggest the UBI could replace a range of other expensive social assistance programmes and could be easily financed through slight increases in sales tax or through a small fee on electronic transactions.

Pascale Eberle, a 55-year-old nurse, said she planned to vote in favour.

"We have to think about our children and grandchildren, and give them the chance at a different kind of life," she told AFP.

The idea of a basic income has been bouncing around in more radical circles for centuries, but it has recently gained more mainstream traction.

Concrete projects to introduce some variation of the UBI, albeit at a lower level than what is being discussed in Switzerland, are underway at local and regional levels in a range of countries.

Finland is planning to trial a universal basic income -- involving less money than proposed by Switzerland and with conditions attached -- in 2017. The Dutch city of Utrecht is also planning a similar experiment.

International Labour Organization chief Guy Ryder said he expected interest in the issue to swell, as technological advances make more and more jobs obsolete, and a growing number of people remain stuck in poverty despite holding a job.

"We are going to have to find ways of distributing national income which are not directly related to the work that we do," he said.

Last month, campaigners rolled out a massive, 8,115-square-metre (87,350-square-foot) poster in Geneva asking: "What would you do if your income were taken care of?"

Since then, people have been covering billboards across Switzerland with their answers, including: "Study quantum physics," and "Make a feature film".

Eberle says she would "keep working, because I like my job, but I would work less and do other things on the side."

As part of Switzerland's direct democracy system, the Swiss will also vote Sunday on a range of other issues, including on whether to allow genetic screening of embryos and a plan to speed up the country's asylum process.