Uganda junior swimmers yet again underlined their dominance in the regional swimming events when they once again came top at the Kenya National Junior Championships that ended in Nairobi on Saturday.

Represented by swimmers from four clubs; Dolphins, Silver Fins, Shark Teens and the Seals Club,  the under 11 year olds put on a great show impressing many at the annual championships.

Kirabo Namutebi, 11, and seven year old Jordan Ssamula were the biggest individual winners with 5 and 4 gold medals from different races.

Ssamula opened the way when he won the boys' 7&Under-25m breaststroke event in 24.52 seconds in the second heat of the championship before he came first in the 25m back, 100m IM and the 25m freestyle races. 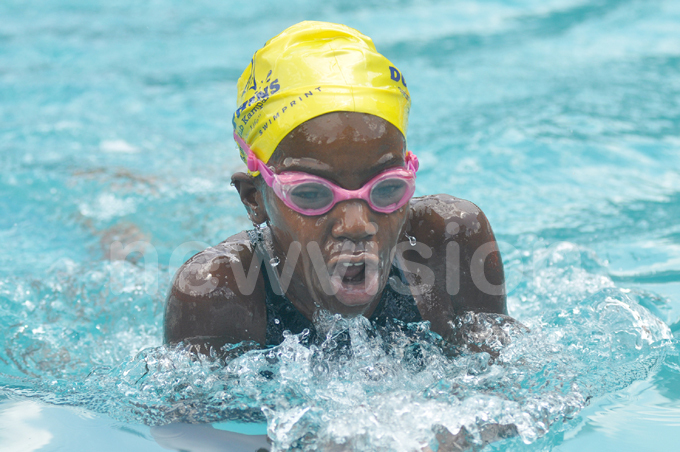 Dolphins' Kirabo Namutebi in action during a local event

The Dolphins were also outstanding in the relay events with Byansi Siima, Aleena Katemba, Atia Tendo, Makula Kyabayinze winning gold in the 7&under 100m Medley Relay and that of Michelle Irungu, Kimberly Kabiri, Hiley Tunga and Karimah Katemba in the 8 year olds.

Hannah Kyanda (1gold+2silver+1bronze) and Zuri Owiny (1silver+2bronze), were also outstanding alongside Adam Moussa, Anelka Okello, Joshua Lumonya and Yonnah Lumonya for the Silverfins Academy,  who also won the 200m freestyle and 100m Medley Relay for the 11 and 8 year olds respectively.

William Jordan Makanga, was the only star for the Seals Club claiming gold in the 25m breaststroke event of the 9 year olds', while the likes of Bukhari Kirimanyi, Achram Lubega and Rodney Kabuye of the Shark Teens made their debut at the championship.