Trump urges Republican unity as he eyes clash with Clinton

Trump's path to the GOP presidential nomination is clear after his commanding victory in Indiana's primary Tuesday pushed remaining challengers Ted Cruz and then Ohio Governor John Kasich out of the race. 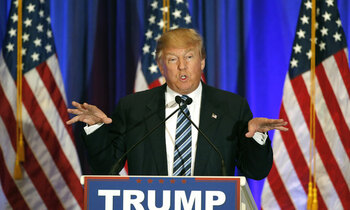 Trump's path to the GOP presidential nomination is clear after his commanding victory in Indiana's primary Tuesday pushed remaining challengers Ted Cruz and then Ohio Governor John Kasich out of the race.

Their capitulations brought the curtain down on one of the most contentious and chaotic nomination battles in generations, in which Trump pummelled no fewer than 16 rivals into submission.

But with unfavorability ratings among the highest of any modern presidential candidate, and concern within his own party about his temperament, the real estate mogul swiftly sought to assuage concerns about how he would govern.

"I know people aren't sure right now what a President Trump will be like," he told The New York Times.

"But things will be fine. I'm not running for president to make things unstable for the country."

- 'They loved me' -Trump also began discussing the idea of his possible running mate, telling ABC News he wanted "a person with political experience" to compliment his own business acumen.

Trump himself said he could consider Kasich, a former congressman who helped balance the federal budget, as his vice presidential pick.

Bowing out on Wednesday, the Ohio governor grew wistful about the thousands of Americans he met on the campaign trail.

"They loved me, they encouraged me. The people of our country changed me... with stories of their lives," he said.

Just as Trump seized the GOP mantle, a new CNN poll emerged that highlighted the formidable challenge facing him.

It found Clinton, hoping at 68 to become America's first female commander-in-chief, leading the tycoon 54 percent to 41 percent -- her largest lead since July.

Nevertheless, the former secretary of state suffered a shock loss in Indiana to her challenger Bernie Sanders, who has pledged to remain in the race until the end despite an extremely steep hill to climb.

- 'Loose cannon' -With the matchup essentially set, several prominent Republicans are refusing to support Trump in November despite his status as the presumptive nominee.

Those refusals highlight the continued tensions within the GOP, which has been at a loss to describe the stunning ascent of a brash billionaire who was given no chance of winning when he launched his campaign last June.

"If we nominate Trump, we will get destroyed... and we will deserve it," tweeted Senator Lindsey Graham, a Trump rival whose campaign fizzled.

Like Trump, Clinton was already pivoting to the general election.

"He makes these grand statements and grand accusations," she said. "At some point when you're running for president you actually have to put a little meat on the bones."

Her campaign released an advertisement mocking Trump's claim that he will unify the Republican Party, airing a collection of video clips showing his former presidential rivals and other prominent Republicans denouncing him in withering terms.

The former reality TV star is "the most vulgar person ever to aspire to the presidency," says Florida Senator Marco Rubio, who dropped out of the race last month.

Trump dismissed Clinton's criticism along with concerns about his unfavorability ratings, saying his campaign had attracted millions of supporters to the Republican Party.

"Hillary will actually be easier to beat than many of the senators, governors, etc. we were just victorious with," he told NBC.

- Voters 'chose another path' -As Tuesday's contest in Indiana was called overwhelmingly in Trump's favor, Cruz conceded to supporters in Indianapolis that he no longer had a viable way forward.

"We gave it everything we've got, but the voters chose another path," he said.

It was a stunning denouement for the 45-year-old arch-conservative Texas senator, who had insisted he would press on to the final day of the Republican race.

Having amassed 1,053 delegates, Trump was already close to reaching the magic number needed to avoid a contested party convention in July.

"I believe Donald Trump will ultimately get chosen," Republican National Committee chief Reince Priebus said in an extraordinary embrace of a candidate the establishment had fought tooth and nail to stop.

"We need to get behind the Republican nominee."

Trump is pushing ahead with his campaign to reach 1,237 delegates nevertheless, heading to West Virginia to hold a rally on Thursday evening.