'My house was washed away by floods'

"My house was washed away by the floods. In the middle of the night, we endured the cold night in the bush 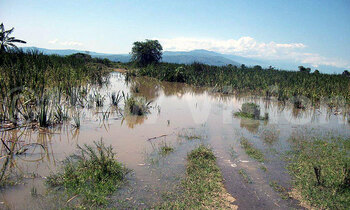 At least 100 homesteads in Kasese district have been displaced following fresh floods that have hit several areas in Karusandara sub-county.

The displaced residents of Kanyabyoyo and Kyalanga villages in Karusandara sub-county are living in makeshift structures provided by Save the Children International at designated places.

John Matte, one of the residents whose house was washed away by the Sunday night floods, says that he has shifted all his family members to a camp at the health center.

"My house was washed away by the floods. In the middle of the night, we endured the cold night in the bush and I am now appealing to the government to relocate us because we are going to die," said Matte.

"Save the Children has provided some tents and a camp has been set up at Karusandara health center III where people are currently staying. They don't have food and the hygiene is very poor," says Ezra Turyahabwe, the area LCIII chairman.

The project officer for Disaster Risk Response with Save the Children Kasese branch, Vian Musika, says they swiftly intervened as people's houses had been submerged due to the devastating floods.

The floods followed a heavy half-day downpour, causing River Mukuku and Ssebwe to burst its banks.

Turyahabwe confirmed that more than 100 families several families have been affected, adding that the area authorities were compiling detailed data about the problem in the area.

"We are currently compiling details of the affected people and forward them to the disaster committee of the district to see how to help them because the effects are severe."

A state of emergency has been declared in the area.

"This is a very painful occurrence. I ask the people of Karusandara to be calm and united. Let's be strong; this will come to an end," said Turyahabwe on Monday.

"Roads and homes can be rebuilt; but it takes time to grow food, yet people need to eat," he added.

Jane Basisa, 80, said she is residing in one of the makeshift structures but together with her seven grandsons and her husband, the living is very small. "The tent is very small to accommodate me and all my grandsons but we don't have any option because our house was destroyed by the flooding river."

She asked government to intervene and help the local people who are suffering a lot with no food, couple with poor shelter.

The fresh floods have rekindled the memories of the May 2013 catastrophic floods that hit various parts of Kasese district during which at over 14 people died and both private and public properties worth billions of shillings destroyed.

A number of villages along the Nyamwamba river especially Kanyaruboga, Katiri and the Kilembe Hospital Nurses village were eroded and are no more as bridges across some of the rivers collapsed and not yet reconstructed to-date.

The residents in the areas that were most affected, particularly along the Nyamwamba River valley in Kasese Municipality, are currently living in panic whenever it rains.