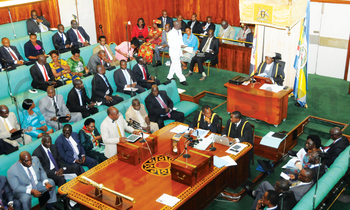 However according to the civil society, the move if not reconsidered, will lead to loss of additional tax by the tax body.

"If this Bill is assented to by the President, Uganda will lose about UGX41.58bn additional revenue annually," said Patrick Tumwebaze, the executive director Uganda Debt Network.

The CSOs which include SEATINI, Uganda Debt Network, CSBAG among other organizations,  said if the sh41.58bn is generated in tax, it can help the government address some of the most pressing needs in sectors such as the health, education , local government and the agriculture sectors.

"Our hope is President Museveni. It is him to decide whether to side with the MPs, or the people. Let him pronounce himself on this matter if he decides to assent to this Bill, he will show Ugandans whether he is on the side of the oppressor or the oppressed," said  Fredrick Ekakoro, the president FOWODE  Young Leaders Alumni Association.

The activists have called on President Yoweri Museveni not to ascent to the Bill.

The CSOs who are determined to challenge the matter in the courts of law, have appealed to Parliament to rethink its decision, as way of widening the tax base for Uganda.

"Parliament should consider revising its decision, if not the President should not assent to this Bill. The tax burden concerns all of us," said Carol Namagembe, the program associate CSBAG.

The civil society movement expressed concern that MPs failing to pay tax on their emoluments, indicates that the tax burden will now shift to the poor Ugandans whose income remains low.

The CSOs were on Sunday addressing journalists at the Uganda Debt Network offices in Ntinda, over the recently passed Bill.

Speaking at the press conference, Everest Kayondo,  the chairman Kampala City Traders Association (KACITA) noted that traders pay up to 42% of the local tax collected by URA, adding that MPs exempting themselves from tax, is a clear induction that URA will resort to them to fill the tax gap.

"If the MPs don't pay, the burden will obviously be pushed back to us, the MPs refusing to pay taxes shows that they are not living an exemplary life to us their electorate," added Kayondo.

The CSOs noted that, the tax payers will have to pay sh11b to meet MPs expenses on a monthly basis, minus the over sh100m needed for each MP to buy new cars.