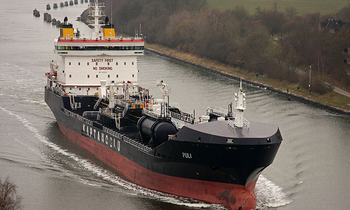 LAGOS/ISTANBUL - Pirates have attacked a Turkish cargo ship off the coast of Nigeria, kidnapping six crew members in a region increasingly hit by piracy in recent years, the Nigerian navy said on Monday.

"All the six Turkish crew members, including the captain of the vessel, the chief officer and the chief engineer, were abducted by the attackers," Nigerian Navy spokesman Chris Ezekobe told AFP.

The pirates attacked the vessel in the dead of night while it was steaming through the oil-rich Niger Delta, added the spokesman.

Ezekobe said the ship -- a merchant tanker -- was used for crude oil operations and the navy was working with Interpol and Nigeria's secret police to secure the crew's release.

Both the kidnapped crew and those who remained on the ship, were "in good health", the company was reported as saying.

It was unclear how many crew members were aboard, which was carrying chemicals, when it was attacked. Company officials said they have had no contact with the pirates.

Dirk Steffen, director of maritime security at the Denmark-based Risk Intelligence firm, said the vessel was en route from Port Gentil in Gabon to the Ivory Coast capital, Abidjan, at the time.

"The attackers had possibly already attempted to board another ship in the vicinity the previous day," he said in an email.

"It is extremely busy outside the Niger Delta at the moment and we had three attacks against tankers before this one between April 7 and 10."

At the end of 2015, pirates kidnapped and later released crew members from Lithuania, Ukraine and Poland in separate attacks in the area, increasingly a piracy hotspot.

Ship hijackings have become more frequent since President Muhammadu Buhari took office in Nigeria last year and started winding down an amnesty to former militants in the delta region.

Payments were offered in exchange for an end to violence, which included kidnappings of oil workers and sabotage of pipelines that plagued the region in the 2000s.

The Control Risks consultancy in February told reporters in Lagos there had been 24 cases of "piracy and armed robbery at sea" since the turn of the year -- double the number in the final two months of 2015.

Attacks in the Gulf of Guinea have increased while incidents of piracy off the coast of Somalia in eastern Africa have significantly fallen in the past three years.

Patrols by international warships and armed guards aboard commercial vessels have significantly reduced the problem in what was once the global hub for high-seas piracy.