MPs to meet Museveni over plight of foreign officers

In a meeting on Wednesday with minister of state for foreign affairs, Okello Oryem and ministry of foreign affairs top echelon led by permanent secretary, James Mugume, over issues relating to the ministry's budget for the next financial year, the lawmakers said only a meeting with Museveni might help solve the perennial poor pay of Uganda's diplomats.

Lawmakers on the foreign affairs committee are seeking an audience with President Yoweri Museveni over the plight of Uganda's Foreign Service officers whom they contend are working under conditions not befitting of their status.

In a meeting on Wednesday with minister of state for foreign affairs, Okello Oryem and ministry of foreign affairs top echelon led by permanent secretary, James Mugume,  over issues relating to the ministry's budget for the next financial year, the lawmakers said only a meeting with Museveni might help solve the perennial poor pay of Uganda's diplomats.

MPs Jack Wamai Wamanga, Rose Mutonyi, Hood Katuramu and committee chairperson, Dr. Sam Okuonzi told Oryem that despite parliament making a case for improvement of welfare of Uganda's Foreign Service officers over the years, the issue of poor remuneration of diplomats is yet to be addressed.

"When officers at ministry of finance convert $2000 (about sh6m) into Ugandan shillings, they think that these people are getting a lot of money in allowances," Mutonyi, a former career diplomat said.
Mugume had earlier told lawmakers that education allowances for diplomats with school going children in non-English speaking countries had been raised to $2000 per child.

From delayed salaries of embassy staff, domiciling in near condemned buildings, to remuneration that can hardly enable them keep their heads above waters in foreign capitals with very high cost of living, Oryem, in a candid submission made a case for Uganda to pick a leaf from other countries that allow their missions to use Non-Tax Revenue (NTR) at source.

This, Oryem said, can help mitigate some of the financial shortfalls blighting Uganda's missions abroad.  "There has never been an incident where NTR from our missions has been misappropriated by our officers. So, the reason to deny our missions permission to use part of NTR at source is hard to understand," Oryem said. 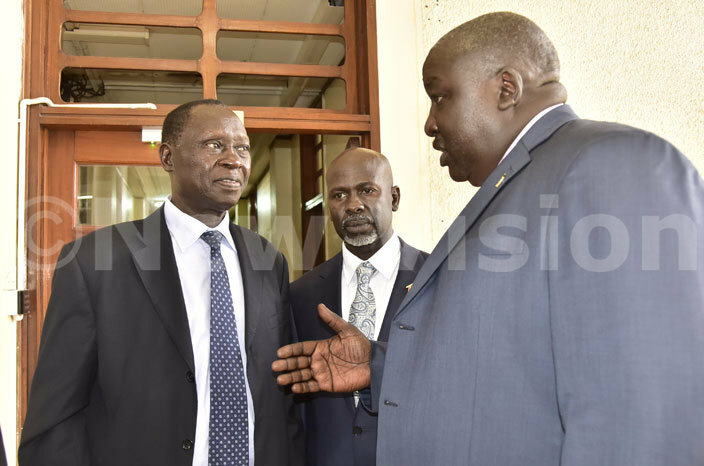 In case of Uganda's missions abroad, NTR is largely derived from visa fees. Unlike other countries like Kenya and Tanzania which allow their missions to use part of it at source, NTR at Uganda's mission abroad is deemed part of the consolidated fund.

This means that notwithstanding their financial shortfalls, missions abroad remit NTR to ministry of foreign affairs.

Oryem told MPs that the secretary to the treasury recently rejected requests to have missions abroad use part of the NTR at source, saying it will amount to creating a parallel center of managing public funds.

To highlight the plight of Uganda's Foreign Service officers, Oryem gave an example of our mission in New York, whose embassy building (Uganda House) is housing the embassies of Cameroon and South Sudan.

Oryem said a number of local employees at Uganda's New York mission have 'defected' to the two embassies because they sometimes go without salary for months.
"Can you imagine these tenants looking after their diplomats and staff better than their landlord?" Oryem said.

In his reports over the years, the Auditor General has parted curtains on the sorry state of Uganda's missions abroad - highlighting issues like derelict national properties and operating in buildings that are rundown. Ambassadors are appointed by the president.