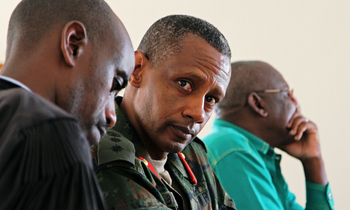 A Rwandan military tribunal on Thursday condemned two senior army figures to 20 years in prison for inciting rebellion, an AFP correspondent at the Kigali court said.

"The court condemns Colonel Tom Byabagamba to 21 years in jail and a reduction in rank, and retired general Frank Rusagara to 20 years in prison," said Judge Narcisse Nsengiyumva.

Both men were once close to the inner circle of Rwandan President Paul Kagame.

The two men were arrested in August 2014 and charged with inciting rebellion by "spreading rumours" and "tarnishing the image of the country and government". Both denied all the charges against them, and following the verdict, vowed to appeal.

According to military prosecutors, Byabagamba had attempted to turn military officials against the government, while Rusagara had been relaying "propaganda" from the dissident Rwanda National Congress (RNC), an exiled opposition group that includes several former top members of Kagame's ruling Rwandan Patriotic Front (RPF).

During the trial, the prosecutor said Rusagara had been heard saying Rwanda "is a police state and a banana republic", and that he had described Kagame as a "dictator".

Critics of Kagame, however, say the trials expose the workings of a paranoid state that is increasingly nervous over the activities of the RNC.

Kagame, 58, has run Rwanda since his ethnic Tutsi rebel army, the Rwanda Patriotic Front (RPF), ended a 1994 genocide by extremists from the Hutu majority, in which an estimated 800,000 people were massacred, the vast majority of them Tutsis.

Elected first in 2003 and again in 2010, he recently announced plans to run for an exceptional third seven-year term in 2017, drawing criticism from the United States and the European Union.

Rusagara's driver, former army sergeant Francois Kabayiza, was also sentenced to five years of prison for withholding evidence. He had also denied the charges and vowed to appeal.