LCIF made the sh3.3b contribution as part of the fundraising towards Her Majesty Queen Elizabeth of England's project aimed at eliminating trachoma worldwide 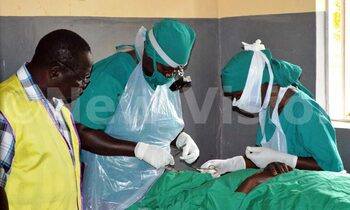 Trachoma patients in Uganda are to benefit from the $1m (sh3.3b) grant from the Lions Clubs International Foundation (LCIF) through the Lions of Uganda aimed at eliminating trachoma in 17 districts in Karamoja and Busoga regions.

The treatment of trachoma patients is being implemented through the Lions of Uganda Trachoma Project, according to Dr. Michael Kakinda, the project coordinator.

"We are working with Carter Centre as the coordinating partners, Sightsavers Uganda and CBM as implementing partners and the Ministry of Health who oversee how the project is being implemented," Kakinda said. Trichiasis is the sight-threatening condition characterized by conjunctival scarring caused by Chlamydia Trachomatis trachoma, the most common infectious cause of blindness worldwide.

Kakinda revealed that LCIF made the sh3.3b contribution as part of the fundraising towards Her Majesty Queen Elizabeth of England's project aimed at eliminating trachoma worldwide. 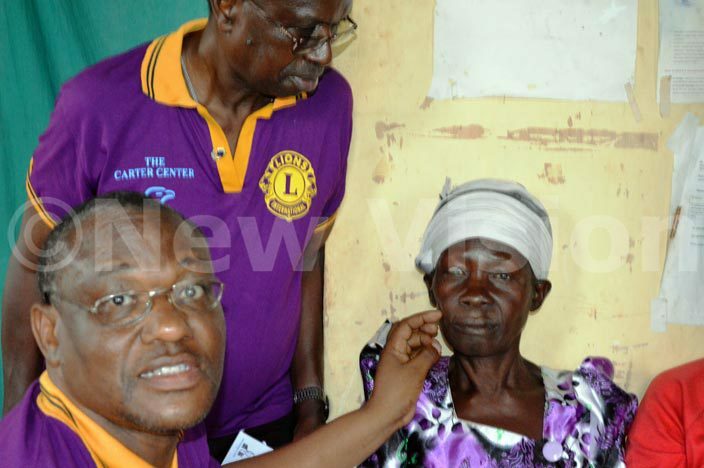 He said the fundraising was part of the Diamond Jubilee celebrations where a charitable foundation, Queen Elizabeth Diamond Jubilee Trust Fund, was set up to mark the Queen's 60-year contribution to the commonwealth.

"The objective of the Trust is to decrease the Trachoma Trichiasis surgeries backlog by 75% in 17 districts (seven in Karamoja and 10 in Busoga)," Kakinda noted, adding that a total of 8908 trachoma patients have so far been operated upon since the project began in January 2015.

Uganda is among the five commonwealth countries whose trachoma patients will benefit from The Trust Fund. Besides Uganda, the initiative that plans to eliminate trachoma between 2014-2019, will also serve patients from Kenya, Malawi, Nigeria and Mozambique.

Yesse Mubanginzi, the Uganda project chairperson said four districts of; Jinja, Buyende, Kamuli and Luuka, had at the end of the second quarter of the project in September last year achieved the Ultimate Intervention Goal of eliminating trachoma, hence less than 1 in 1,000 of people in those districts have Trachoma Trichiaisis.

"However, despite these successes, there is need to re-think our social mobilization strategies to have a similar impact on Karamoja region where 95% of the Trachoma Trichiasis backlog is found. This is further being hampered by famine currently ravaging the region. Well thought out processes and activities will be vital in eliminating Trachoma from the said region," observed Mubangizi.

During the project, social mobilisation of patients in Mayuge, Abim and Nakapirpirit Busia, Kumi, Soroti and Tororo districts for surgical camps was done using Village Health. Surgical camps were also held at Nabilatuk Health Centre IV and they covered parishes of Lorukumo, Natinai and Nakuri.

According to Mubangizi, they have carried out social mobilization but it varied greatly between Karamoja and Busoga region.

"In Busoga region, we had radio talk shows, town criers and meetings with opinion leaders, while in Karamoja region we focused on meeting elected leaders, district councils, religious leaders and manyatta heads and ensuring they understand trachoma, its prevention and treatment," he noted.

In his presentation about trachoma, Prof. Paul Courtright from the University of Cape Town, who is also the project technical advisor, observed that the World Health Organization was changing the way it calculates the prevalence of Trachoma Trichiasis following surveys.

"It is cognizant of the fact that Trachoma is not the only cause of Trichiasis. Hence, the burden of Trachoma Trichiasis is not as high as previously estimated, so the program was to use the new formulae to revise the targets downwards," Courtright said.

As a result, the project team has recommended the involvement of staff of the health facilities hosting the surgical camps, arguing that this would help in project implementation and sustainability since patients will be directed to the right places.

"Since health facilities are supposed to mop up the patients with Trachoma Trichaisis when the districts reach their ultimate intervention goal, we have tried to support extra staff from the health facilities to help the surgical camp team, as they conduct the camps. The two persons being supported by the project are too few," observed the team in its recommendations.

The team also recommended that district health officers and the respective Ophthalmologic clinical officers with the help of implementing partners brainstorm and agree on the best methodology for social mobilization that suits every district.
The trachoma project comes at the backdrop of various medical camps that Lions Clubs in various parts of the country.

One such camp was in March 2014 where a total of 912 residents of Ngogwe sub-county in Buikwe district with various ailments received free treatment courtesy of the Kampala New Century Lions Club.