The Cranes' focus is now on the 2017 Africa Cup of Nations qualifiers. 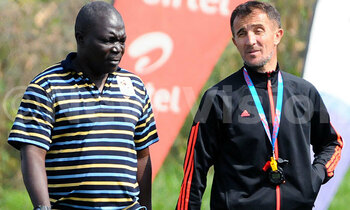 Uganda Cranes Coach Micho Sirodjovic is set to summon a 30-man squad to start training in preparation for the 2017 Africa Cup of Nations (AFCON) qualifiers against Burkina Faso.

Uganda will play Les Etalons in a double header on March 26 and March 29 in Ouagadougou and Kampala respectively.

Meanwhile, FUFA's spokesperson Ahmed Hussein says they have unanimously asked government to help the team with a chartered plane to prevent them from being fatigued.

The 31st edition of the continent's biggest tournament will be hosted by Gabon early next year.

Uganda will be hoping to end a 38-year run of failing to qualify for the finals, having come so close in recent campaigns.

And as it stands, Micho's side is on track, having picked up maximum points in the first two qualifier games to top Group D that features Burkina Faso, Botswana and Comoros.

Geoffrey Massa and Tonny Mawejje, pictured here celebrating a goal with teammates, have scored in the first two games

The Cranes started off their campaign with a 2-0 win over Botswana in Kampala in June last year, thanks to strikes by Geoffrey Massa and Brian Umony.

They followed it up with a 1-0 away victory over Comoros at the Stade Said Mohamed Cheikh in Mitsamiouli. A first-half strike by Tonny Mawejje ensured that the Cranes' 100 percent record remained intact.

More wins over Burkina Faso later this month will see Uganda consolidate their ambitions to make it past the group stage - for the first time since 1978.

The Cranes started off the year with participation in the African Nations Championship (CHAN) in Rwanda, but failed to make it past the group stage.