Infantino, he insisted, had been part of a fairly functioning UEFA, which should not be mistaken for its senior global partner FIFA. 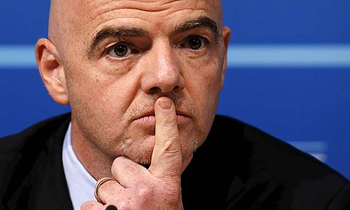 ZURICH - Gianni Infantino insisted Sunday that FIFA's reform package would close the door on a chapter of pain at world football's governing body and usher in an era of joy.

The package will limit Infantino's powers compared to those formerly enjoyed by the disgraced Sepp Blatter, and there will be a 12-year term limit for all top officials and their earnings will be fully disclosed.

The all-powerful executive committee will be renamed a FIFA council and football's multi-billion dollar business activities will be run separately from football politics.

"This will be done very fast," the freshly elected president said, on the fringe of a FIFA museum inauguration.

"I mean we have to look forward. The reforms have been approved. As of now and for the future there will be no issues any more," he promised.

"And as for the past, we have to make sure we cooperate fully with all the authorities to make sure that everything comes out if something has happened."

Having admitted there may be more skeletons in FIFA's cupboard he conversely claimed the future was bright when asked if there was more pain for FIFA to come.

"There is more joy for FIFA to come," he claimed.

Asked what his top priority was as he embarks on his much scrutinised project, Infantino said he was raring to go and hammered home his conviction.

"So I will go up to the office to start looking at concretely how to implement these reforms so that we can very soon as well concentrate on football."

The 45-year-old Swiss-Italian, who beat main rival Sheikh Salman bin Ebrahim Al Khalifa by 115 votes to 88 in the second round vote on Friday has been hailed by many as the right man at the right time, including English football supremo Greg Dyke.

The English FA chairman described the Swiss as "straight".

Speaking on BBC Radio 5 Live's Sportsweek show Dyke said: "This is a chance. Hopefully a new leader plus a reform programme can actually make it tougher to see the sort of antics we have seen in recent years."

Infantino, he insisted, had been part of a fairly functioning UEFA, which should not be mistaken for its senior global partner FIFA.

He said: "If you have got someone like Gianni, you have got more chance of that being done properly - it's certainly done properly in UEFA - so that you know where the money is being spent because we all want more money to go to countries around the world where you need money to develop football, and some countries need it more than others."