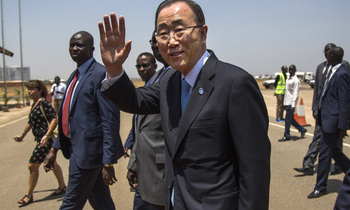 UN Secretary General Ban Ki-moon arrived in Juba on Thursday to try and revive a shaky peace deal that has so far failed to end South Sudan's two-year-old civil war.

Fighting has continued despite an August peace deal with at least 18 killed in the latest incident in the north-eastern town of Malakal last week when government soldiers participated in an attack on a UN-protected camp for nearly 50,000 civilians seeking shelter from the war.

The August deal, signed under international pressure, leaves Kiir as president and returns Machar to his old job as deputy, but in a sign of the levels of mistrust between the two men Machar remains in exile despite his reappointment earlier this month.

The battle for control of the country has repeatedly pushed South Sudan to the brink of famine, with millions only saved from starvation by the intervention of the UN and aid agencies. 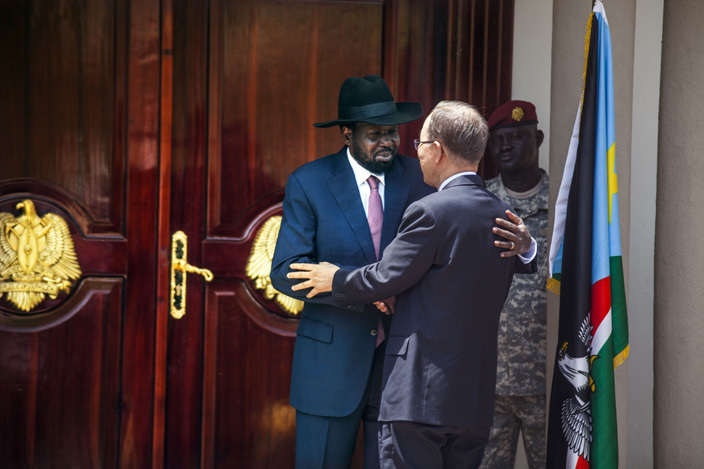 UN Secretary General Ban Ki-moon (R) is welcomed by President of the Republic of South Sudan, Salva Kiir, upon his arrival at the State House in Juba, South Sudan, on February 25, 2016, as part of his tour in Eastern Africa. Albert Gonzalez Farran / AFP

The conflict has been marked by rights violations and attacks on civilians with children murdered or recruited into militias, women and girls abducted into rape camps and used as sex slaves, multiple ethnic massacres, attacks on UN bases and aid workers.

An African Union investigation published last year found evidence of forced cannibalism and concluded that war crimes had been committed.

A succession of UN rights reports have also found evidence of war crimes.

Neither Kiir nor Machar have faced any sanctions for the actions of armed forces under their command.

During his visit Ban is due to visit a UN camp in the capital housing people uprooted by the fighting, some of the more than 2.3 million South Sudanese forced from their homes since the war began.