Residents reported gunmen shooting in crowded areas in the tightly packed camp of tents and basic shelters housing over 47,700 people fleeing a civil war that began in late 2013. 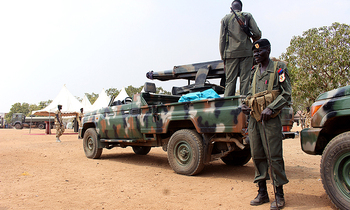 Over were 70 wounded in the clashes in the UN camp on Wednesday to Thursday in the north-eastern town of Malakal, Doctors Without Borders (MSF) has said. Two of the 18 killed were their own staff, while 46 of the injured had bullet wounds.

Residents reported gunmen shooting in crowded areas in the tightly packed camp of tents and basic shelters housing over 47,700 people fleeing a civil war that began in late 2013.

The UN Mission in South Sudan (UNMISS) blamed the clashes on rival tribes inside the camp -- "between Shilluk and Dinka youths".

It added that "such an attack against civilians and UN premises may constitute a war crime."

Resident Jacob Nhial described government troops wearing the uniform of the Sudan People's Liberation Army (SPLA) "shooting at civilians" with fighting taking place in the camp, as well as gunfire coming from soldiers outside.

A PoC, or Protection of Civilian site, is the UN acronym for places where South Sudan civilians are supposed to be safe, defended by peacekeepers while IDPs is the term the UN uses for internally displaced people.

"UN peacekeepers appear to have taken control of the PoC site and the SPLA soldiers are reported to have left the camp," the UN refugee agency said Friday.

"It is absolutely unacceptable that this place of refuge has become a site where people have been killed and injured," he said.

An entire section of the camp was razed to the ground, with sporadic shooting still heard in Malakal on Friday morning, aid workers said.

The International Organization for Migration (IOM) said half the camp had fled their shelters -- some 25,000 people -- with areas, "looted and burned, including shelters, clinics and water tanks."

The UN mission has more than 12,000 peacekeepers with half of them deployed solely to protect the nearly 200,000 civilians sheltering in their bases around the country.

SPLA spokesman Marko Mayol said he had no information on the reports that government troops were involved.

Rebel spokesman James Gadet, condemned the "heinous crimes committed by the government", claiming militia were issued with guns "by elements of the government" in what he called "a violation of the peace agreement."

Civil war began in December 2013 when President Salva Kiir accused his former deputy Riek Machar of planning a coup, setting off a cycle of retaliatory killings that have split the poverty-stricken, landlocked country along ethnic lines.

Machar has yet to return to take up the post and fighting continues, with the conflict now involving multiple militia forces driven by local agendas or revenge, who pay little heed to paper peace deals.