A total of 10 officers, including Musani were promoted to various ranks 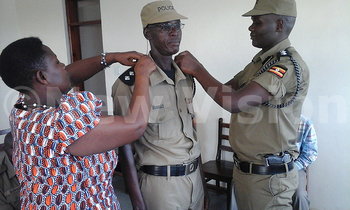 The regional police commander, Micheal Musani Sabila, said the move is aimed at enhancing effective performance of the police officers and accountability to Ugandans.

Speaking at the piping ceremony of the newly promoted officers in  greater Bushenyi region held at the regions headquarters on Tuesday, Musani said this is the time to clean up the force and  make it more effective to deal with the 21st century challenges.

"We have huge and many challenging tasks ahead of us. We are going to  start a new system of every officer auditing whatever he does on daily  basis,"he said.

Musani said the promotion of the officers of which some had taken many  years was a big motivation to the officers.