"We have been informed that the former secretary-general Boutros Boutros Ghali has passed away." 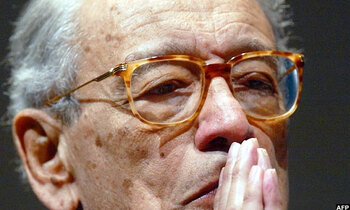 Former UN secretary-general Boutros Boutros-Ghali, who led the world body from 1992 to 1996, has died, the UN Security Council announced Tuesday.

"We have been informed that the former secretary-general Boutros Boutros-Ghali has passed away," Venezuela's Ambassador Rafael Ramirez who holds this month's council presidency said.

Security Council members stood to observe a moment of silence in memory of Boutros-Ghali, who was 93.

The Egyptian diplomat is likely to be best remembered as the secretary-general whose second term was blocked by a US veto.

Boutros-Ghali had received a phone call from President Abdel Fattah al-Sisi last Thursday after he was admitted to a Cairo hospital.

A former Egyptian foreign minister, the veteran diplomat headed the world body during one of its most difficult times with crises in Somalia, Rwanda, the Middle East and the former Yugoslavia.

Boutros-Ghali was born on November 14, 1922 into a Coptic Christian family in Cairo.

He was educated at Cairo University and in Paris, where he established a lifelong connection with France.

After a university career centred on international relations, including a spell at Columbia University in New York, he became Egypt's foreign minister in 1977, under president Anwar al-Sadat.

He accompanied Sadat on his ground-breaking trip to Jerusalem in that year, an event which both forged a peace agreement between Egypt and Israel and led to Sadat's assassination four years later.

Boutros-Ghali became the United Nations' sixth secretary-general, and its first from the African continent, on January 1, 1992.