The new intelligence estimate "means they continue to be a substantial threat, but the potential numbers have declined," said White House spokesman Josh Earnest. 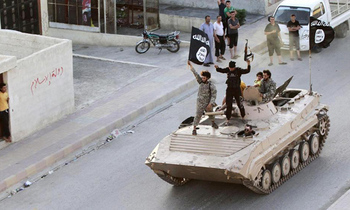 WASHINGTON  - Islamic State has as many as 25,000 fighters in Syria and Iraq, down from a previous estimate of up to 31,000, according to a U.S. intelligence report revealed by the White House on Thursday.

U.S. officials cited factors such as battlefield casualties and desertions to explain the roughly 20 percent decrease in fighters, and said the report showed a U.S.-led campaign to crush Islamic State was making progress.

The new intelligence estimate "means they continue to be a substantial threat, but the potential numbers have declined," said White House spokesman Josh Earnest.

Ground fighting efforts by coalition partners of the United States are having an effect in the conflict against Islamic State, also known as ISIS or ISIL, he said.

U.S.-backed Iraqi security forces and tribal militias and moderate opposition groups in Syria have contributed. So too has a U.S.-led air campaign that has launched more than 10,000 strikes against the Islamist extremists, Earnest said.

Finally, international efforts are beginning to stem the flow of foreigners seeking to join the movement.

"ISIL is having more difficulty than they've had before in replenishing their ranks, and we have long been aware of the need of the international community to cooperate to stop the flow of foreign fighters to the region," said Earnest.

Some North African jihadists who might otherwise have traveled to Syria to join Islamic State may instead have heeded calls by the movement's leadership to head to Libya, where the Islamists are fighting to expand their grip on territory on the Mediterranean coast.

The intelligence report did not account for the Islamic State's affiliates in South Asia, other parts of the Middle East and North Africa, where its Libyan branch is expanding.

There appear to be conflicting U.S. estimates of the strength of the movement's Libyan affiliate. Defense officials put the number at some 3,000, while other U.S. officials put it at 5,000-6,000.