In the second half, the visitors made life even more difficult for Kasse when Muwawu slotted home his second of the day. 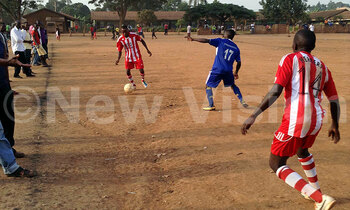 Kyebando FC kicked off their second round of the season with a comprehensive 4-0 away victory over 10-man Kasse FC at Kazo.

The two sides had played out a draw in the first round fixture of the Kampala Regional League.

Kanyanya-based Kyebando wrapped up the two ties as the supreme side and it was a winning debut for new coach Sam Kawalya.

Skipper Arnold Ssembuya opened the goal galore in the 28th minute when he collected a cute pass from his right-back and looped home.

The hosts could not reply and the two sides went for a break at 2-0.

After restart, the visitors made life even more difficult for Kasse when Muwawu slotted home his second of the day from the penalty after a defender held the ball inside the box.

It should have been a hat-trick for the attacker moments later but, left with only the keeper to beat, he tapped wide.

Matters worsened for the home team when they were reduced to 10 men after a defender was given marching orders for using abusive language towards to referee.

Tiago Oscar came off the bench late on to head home and seal an important victory for the visitors.

Coming up, Kyebando will play host to Nansana FC while Kasse will again play at home on Sunday - this time against Lunguja FC.

Kyebando's Sam Kawalya: "The team was perfect in all departments and we deserved the best in the game. Our emphasis in the training was about finishing and indeed we achieved our target as we scored four goals in the game. We are going to correct a few mistakes we made before our next game on Sunday."

Kasse's Eddie Kaweesa: "I give credit first to the visitors for the good attitude but our side was not good enough in finishing especially in the first minutes after failing to convert our chances yet the visitors utilized their chances."