Currently, giraffes do not live in the southern parts of Murchison Falls National Park. 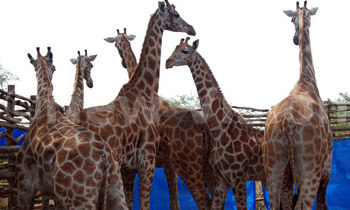 According to UWA's Senior Veterinary Coordinator Patrick Atimnedi, the relocation will involve 20 giraffes which will be moved from the northern parts of Murchison Falls National Park to the Southern part of the park.

Currently, giraffes do not live in the southern parts of Murchison Falls National Park. The 20 individuals comprise 16 females and 4 males. 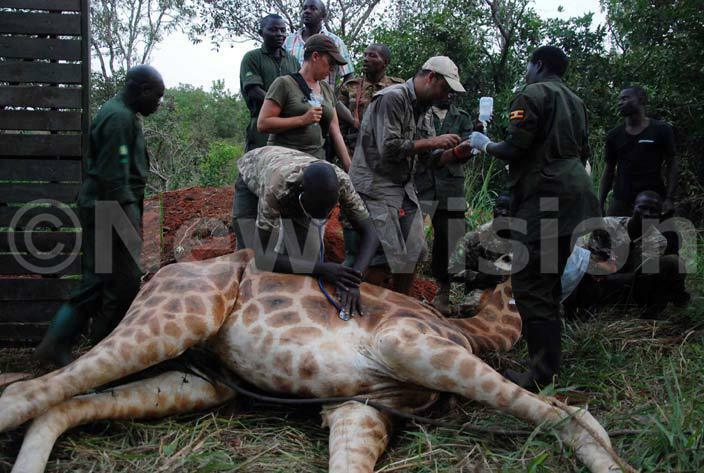 Medical staff of Uganda Wildlife Authority, Uganda Wildlife Education Centre and Giraffe Conservation Foundation helping to save the life of a wounded giraffe during their translocation exercise from the Northern part of Murchison Falls National Park to the Southern part of the Nile. Photo by Abou Kisige

"It is our conviction that this translation exercise will help increase the population of the endangered Rothchild's giraffes in MFNP from the current 860 individuals in Uganda's largest park," Atimnedi said.

He said a team comprising of officials from UWA, Giraffe Conservation Foundation and UWEC formerly Entebbe Zoo set off from Kampala three weeks ago and has been camping at the largest park in Uganda.

Atimnedi said the team has so far identified the giraffes to be captured and some of them have been kept in a boma ( large enclosure) to prepare them for the subsequent movement meant to expand the range for the giraffes.

He said wildlife translocation is a globally recognized management tool in conservation and is used among others to manage populations and environment by reducing habitat destruction and allow for restoration of degraded ones.

"Translocation helps to introduce and reintroduce species into new and former habitats with the aim to reinforce or diversify species in a locality to enhance survival rate and address problem animal cases," Atimnedi said.

UWA's Public Relations Manager, Jossy Muhangi said UWA has had a long history of wildlife translocation in the country over the years dating back from giraffe translocation to Kidepo Valley national park in 1997.