The notion of a national Church or such attempts to nationalise the Catholic Church's hierarchy is contrary to the structure of the Latin Rite Church as stipulated in the 1983 Code of Canon Law. 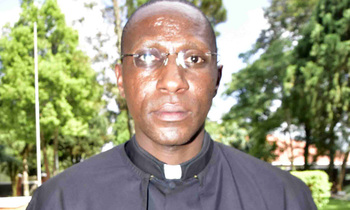 With the recent visit of His Holiness Pope Francis (November 27-29, 2015) some people have been led to think of the Roman Catholic Church as a National Church with a "Bishop-president" in charge of each and every Catholic diocese in Uganda, having supreme authority over all Bishops in Uganda and having authority over all Catholic believers in the Nation.


The notion of a national Church or such attempts to nationalise the Catholic Church's hierarchy is contrary to the structure of the Latin Rite Church as stipulated in the 1983 Code of Canon Law. It is also important to point out that, in March 2015, Cardinal Reinhard Marx of Germany raised a question that provoked the reaction of Cardinal Müller regarding the power of Chairmen of Episcopal Conferences over other bishops in a Particular State.


It is a delicate question. It would be very beneficial for us to examine this question from the biblical origins and some magisterial teachings.


Origin of the episcopal Order in the Church

According to Lumen Gentium (LG) n. 19, the Lord Jesus, having prayed at length to the Father, called to himself those whom he willed and appointed twelve to be with him, whom he might send to preach the Kingdom of God (cf. Mk 3:13-19; Mt 10:1-42). These apostles (cf. Lk 6: 13) he constituted in the form of a college or permanent assembly, at the head of which he placed Peter, chosen from amongst them (Jn 21:15-17).

For the purpose of shepherding the People of God and to increase its numbers without cease, Christ the Lord set up in his Church a variety of offices which aim at the good of the whole body. According to LG 18, § 2, Jesus Christ, the eternal pastor, set up the holy Church by entrusting the apostles with their mission as he himself had been sent by the Father (Cf. Jn 20: 21).

He willed that their successors, the bishops, should be the shepherds in his Church until the end of the world. In order that the episcopate itself, however, might be one and undivided he put Peter at the head of the other apostles, and in him he set up a lasting and visible source and foundation of unity both of faith and of communion.

This teaching concerns the institution, the permanence, the nature and import of the sacred primacy of the Roman Pontiff and his infallible teaching office. Also this teaching enunciates clearly the doctrine concerning bishops, successors of the apostles, who together with Peter's successor, the Vicar of Christ, and the visible head of the whole Church, direct the house of the living God.


On the 26th March 2015, Vatican Press reported Cardinal Gerhard Ludwig Müller, prefect of the Congregation for the Doctrine of the Faith, to have rejected outright the idea floated by Germany's Cardinal Reinhard Marx that various bishops' conferences around the world would decide for themselves on points of discipline or doctrine.


Cardinal Müller told France's Famille Chrétienne that "This is an absolutely anti-Catholic idea that does not respect the catholicity of the Church."  He further remarked that while episcopal conferences may have authority over certain issues they are not a parallel magisterium apart from the pope or outside communion with the bishops united to him.


When cardinal Müller was asked specifically about Cardinal Marx saying that the Church in Germany is "not a subsidiary of Rome," Cardinal Müller said pointedly "the president of an Episcopal Conference is nothing more than a technical moderator, and as such has no special teaching authority."  He added moreover, that the dioceses in a particular country "are not subsidiaries of the secretariat of an Episcopal conference or diocese whose Bishop presides over the Episcopal Conference.


Cardinal Müller further warned that "this attitude makes the risk of making some polarization between the Particular churches and the universal Church."


Following the provisions of the 1983 Code of Canon Law, Canon (Can.) 368, particular Churches are those in which and from which, the one and only Catholic Church exists and these are principally the dioceses.


A diocese is defined in Can. 369 as "a portion of the People of God, which is entrusted to a Bishop to be nurtured by him, with the cooperation of the presbyterium, in such a way that, remaining close to its pastor and gathered by him through the Gospel and the Eucharist in the Holy Spirit, it constitutes a particular Church.


According to John Burke in the "Dictionary of Canon Law" p. 652 whenever the term "Universal" is mentioned in the 1983 Code, it pertains to the whole universe, every place in the world where there are baptized Latin Rite Catholics or Roman Catholics.


According to LG 13, § 2, "all the faithful scattered throughout the world are in communion with each other in the Holy Spirit so that ‘he who dwells in Rome knows those in most distant parts to be his members' (qui Romae sedet, Indos scit membrum suum esse) …

This character of universality which adorns the People of God is a gift from the Lord himself whereby the catholic ceaselessly and efficaciously seeks for the return of all humanity and all its goods under Christ the Head in the unity of his Spirit." So Universal Church refers to every Catholic in the world subject to the supreme authority of the Pope.


The writer is a Catholic priest