Police said the dead from Wednesday's raid included Suleiman Mohamed Awadh, who features on a "most wanted criminals" list with a $20,000 (18,000 euro) bounty on his head. 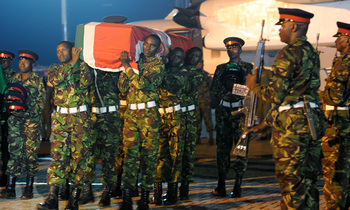 Four terrorism suspects have been shot dead by police in the Kenyan coastal town of Malindi while two others escaped, police said.

Police said the dead from Wednesday's raid included Suleiman Mohamed Awadh, who features on a "most wanted criminals" list with a $20,000 (18,000 euro) bounty on his head.

The list was issued after an attack on Kenya's Garissa university in April 2015, when Shebab militants killed 148 people.

Police said the suspects threw a hand grenade and fired at officers during the early morning raid in the tourist town, which is especially popular with Italian visitors and is home to wealthy playboy Flavio Briatore's "Lion in the Sun" and "Billionaire" resorts.

"The terrorists were heavily armed and they engaged our officers in the shoot-out and, in the end, four of them were fatally wounded," said Malindi police chief Matawa Muchangi.

Awadh, a 25-year-old who was local to the area, was identified among the dead.

The police chief added that two other suspects escaped with injuries during the raid on a rented house close to Malindi's airport.

Afterwards, police found weapons and mobile phones in the house as well as a letter said to be a request to Al-Qaeda's East Africa affiliate, the Shebab, requesting funds. Maps of Malindi were also found with the police station, a supermarket and the popular tourist Marine Park highlighted.

Tourism in Kenya has suffered in recent years as travel warnings along the coast and terrorist attacks elsewhere have deterred foreign visitors.