What is in store for Obama after the White House?

Michelle Obama has repeatedly rejected the idea that she would enter politics as Clinton did following her eight years as first lady. 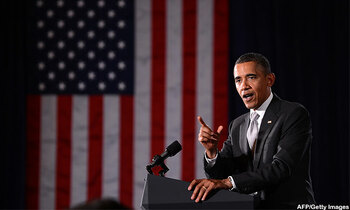 In one year, Barack Obama will leave 1600 Pennsylvania Avenue. So what will life be like for America's first black president after two terms at the White House?

Former presidents rarely remain in Washington after living and working in the US capital's oldest public building.

Jimmy Carter headed home to Georgia, and Ronald Reagan went back to California.

Bill Clinton built a new life in New York, where he created his foundation and where his wife Hillary -- the Democratic front-runner vying to succeed Obama -- launched her political career as a senator.

No one yet knows where the Obamas will head on January 20, 2017, when the next president is sworn in on Capitol Hill.

Every time someone close to them shows interest in a lavish property in Palm Springs or Honolulu, the press speculates about a veiled investment for the First Couple. But so far, no dice. Nothing concrete has emerged.

The Obamas are attached to Chicago -- the president launched his political career there as a community organizer and celebrated his landmark 2008 election win. Obama's presidential library and foundation will also be based in the Windy City.

"All the strands of my life came together and I really became a man when I moved to Chicago," Obama said last year when he made the announcement about the library site.

But so far, there is no clear sign that Chicago is the family's next destination.

"Chicago probably seems a bit too small for them now," said Peter Slevin, a professor at Northwestern University in the Chicago suburbs and the author of "Michelle Obama: A Life."

The only hint given by the US president? He has said that family will be his priority.

"They -- and Michelle -- have made a lot of sacrifices on behalf of my cockamamie ideas, the running for office and things," Obama told ABC in 2013, referring to his daughters.

In early 2017, Malia -- the Obamas' older daughter -- will be at university. Sasha, now at the private Sidwell Friends school in Washington, will have more than half of her high school studies ahead of her.

Slevin says that like Clinton, Obama could settle down in the Big Apple.

"Their friends are expecting the Obamas to live in Washington and then surely move to New York," he told AFP.

"New York has much to offer them at a time when they would like to be a bit more anonymous than it is possible to be in Chicago."

Michelle Obama, a trained lawyer, has repeatedly rejected the idea that she would enter politics as Clinton did following her eight years as first lady.

"There are three things that are certain in life: death, taxes and Michelle is not running for president," Barack Obama said a few weeks ago.

One thing is for sure: money will not be an issue. Obama, who enjoys writing, is expected to focus on the traditional -- and lucrative -- art of writing his autobiography in his post-presidency.

"Memoirs have always been an acceptable means of making money and cashing in on the presidency," says historian Mark Updegrove, who is the director of the Lyndon B. Johnson Presidential Library in Austin, Texas.

Well-paid speaking engagements -- at home and abroad -- should pour in.

"The question is how much you want to commercialize having been the commander-in-chief," adds Updegrove, the author of "Second Acts: Presidential Lives and Legacies After the White House."

Obama has said he hopes to work with minority youths in tough neighborhoods -- where the dropout rate, unemployment and incarceration rates are higher than elsewhere -- to give real meaning to the phrase "equal opportunity."

While some former presidents of the White House have faded into the background, others have made a significant mark during their so-called second act.

John Quincy Adams, who left office in 1829 after failing to win re-election, returned to Congress where he stayed until the end of his life, using his gift for soaring oratory to make the case against slavery.

William Howard Taft, who was president from 1909-1913, then became the chief justice of the US Supreme Court.

Could Obama -- a former president of the Harvard Law Review who will be 55 years old as he starts his post-White House life -- be tempted by the high court?

"I think being a justice is a little bit too monastic for me," he told The New Yorker in October 2014. "Particularly after having spent six years and what will be eight years in this bubble, I think I need to get outside a little bit more."

The example of the two Democratic presidents before him -- Carter and Clinton, who both launched foundations that are respected beyond America's borders -- could serve as a guide for Obama.

Persistent rumors also suggest he could be interested in teaching courses at Columbia University in New York, where he studied in the early 1980s.

"I love teaching. I miss the classroom and engaging with students," he told The New Yorker.

For Updegrove, recent history shows that a president's "Second Act" can also help make his time at the White House look better in retrospect.

"I do think you can burnish your legacy by focusing on the things you most want to be remembered for," he said.