LRA fighters under the joint control of Dominic Ongwen... abducted civilians, forced them to carry looted items... shot at them and threatened them with acts of violence 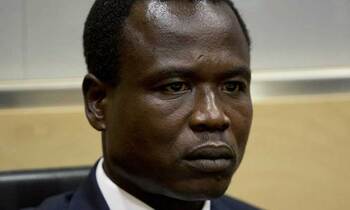 Known as the "White Ant", Ongwen faces 70 counts of war crimes and crimes against humanity for his role from 2002 to 2005 in the rebel group's reign of terror in northern Uganda, led by its fugitive chief Joseph Kony.

A former child-soldier-turned-warlord, Ongwen was Kony's one-time deputy and one of the most senior commanders of the LRA, which is accused of slaughtering more than 100,000 people and abducting 60,000 children in a bloody rebellion against Kampala that began in 1986.

In the five-day confirmation hearing starting on Thursday, prosecutors will lay out the charges to a three-judge bench seeking to show that the evidence is solid enough to put Ongwen in the dock. The judges will then have to determine whether Ongwen should stand trial.

The prosecution will focus in particular on four attacks on camps housing people forced to flee the LRA's violence.

More than 130 people -- many of them children and babies -- died in these attacks and dozens of others were abducted, prosecutors said in the court document containing the charges.

"LRA fighters under the joint control of Dominic Ongwen... abducted civilians, forced them to carry looted items... shot at them and threatened them with acts of violence," the charges read.

In one instance after an attack on the Odek camp, northern Uganda, in April 2004 in which at least 61 men, women and children were killed, "one individual was forced to kill an abducted man from Odek with a club and forced to inspect decomposing bodies, including that of his father," prosecutors said.

Ongwen, who has been wanted by The Hague-based ICC since 2005 in the court's longest-running case, was originally charged with seven war crimes and crimes against humanity.

The ICC's chief prosecutor Fatou Bensouda however in December broadened the charges to 70 which now also include eight sexual and gender-based crimes.

"The victims had no choice but to submit to rape, enslavement, sexual slavery and become forced wives," they said.

Ongwen is further charged with using children under 15 years old to fight in the LRA rebel army.

Born in 1975, Ongwen was transferred to The Hague a year ago shortly after surrendering to US special forces operating in the Central African Republic.

President Barack Obama had deployed a small number of US troops to the region to aid the hunt for Kony, who remains at large. Washington had also offered a $5 million (4.5-million-euro) reward for Ongwen's capture.

Experts believe Ongwen fled after falling out with Kony and almost being killed.

The LRA first emerged in northern Uganda in 1986, where it claimed to fight in the name of the Acholi ethnic group against the government of Ugandan President Yoweri Museveni.

But over the years the LRA has moved across porous regional borders: it shifted from Uganda to sow terror in southern Sudan before moving into northeastern Democratic Republic of Congo, and finally crossing into southeastern Central African Republic in March 2008.

Combining religious mysticism with an astute guerrilla mind and bloodthirsty ruthlessness, Kony has turned scores of young girls into his personal sex slaves while claiming to be fighting to impose the Bible's Ten Commandments.

Ongwen's own troops were notorious for their punishment raids, during which they would slice off victims' lips and ears as a grim calling card.

But rights groups say Ongwen was himself initially a victim -- abducted at 14 by the LRA as he was walking to school -- which may prove a mitigating factor, should he be found guilty at trial.