Burundi has been sliding deeper into violence since Nkurunziza announced his intention to run in elections in July, which he went on to win. 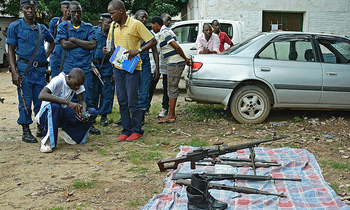 UNITED NATIONS - A confidential UN memo to the Security Council warns that a peacekeeping force that was sent to Burundi would be unable to quell large-scale violence in the conflict-wracked African country.

The memo sent by UN peacekeeping chief Herve Ladsous advised council members last week to travel to Bujumbura for urgent talks on the crisis over President Pierre Nkurunziza's election to a third term.

"A truly worst-case scenario will result in a scale of violence beyond the United Nations' capacity to protect," said the memo obtained by AFP on Tuesday.

The document outlines three scenarios including a continuation of the current level of violence, an escalation and finally, all-out war with fighting along ethnic lines.

"United Nations peacekeeping is limited in its ability to address significant violence against civilians, even violence amounting to genocide where it lacks a political framework or the strategic consent of the host-nation and/or the main parties in the conflict," the memo said.

Burundi has been sliding deeper into violence since Nkurunziza announced his intention to run in elections in July, which he went on to win.

Hundreds have died in the violence and tens of thousands have fled to neighboring countries out of fear of a return to all-out war. Some 300,000 people were killed in the 1993-2005 civil war in Burundi.

Bujumbura has rejected a proposed 5,000-strong African Union contingent to halt the violence, calling it an "invasion" force.

Nkurunziza last month called on Burundians to "stand up to fight" if AU troops set foot on Burundian soil without permission.

Uganda is seeking to mediate talks between the government and the opposition but Nkurunziza refused to take part after a first meeting on December 28.