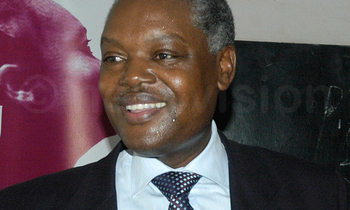 JOHN Warren Nyamugasira has been following the ongoing presidential campaigns with keen interest.

"2016 rhetoric and reality…  By the way not all rhetoric is good. Empty rhetoric is absolutely no good that is why we must go behind words to meaning.

Some of us Ugandans are not colour blind. We want to vote issues, alternative policy and above all serious commitment to deliver. No wolokoso please," Nyamugasira said in the last of his series of tweets on November 13.

However, Nyamugasira, a prominent economist, researcher and newspaper columnist, died on Monday morning before voting his favourite candidate.

According to one of his relatives Samaya Kyategeka, Nyamugasira, who had battled diabetes for some years, died on his way to Kampala Hospital.

"He woke up very early in the morning and said he was not feeling well. He asked us to call the driver to take him to the hospital. Unfortunately he died at around 5:00am before they could reach the hospital," Kyategeka said.

According to Kyategeka, there will be a funeral service at 10:00am at All Saints Cathedral Nakasero on Tuesday after which the body will be transported to his home in Mparo Nyarurambi in Kabale district.  He will be laid to rest on Wednesday. He is survived by three children.

"My guardian has been a hardworking person. He set up several projects to provide employment to the youth. We will greatly miss him," Kyategeka said.

Richard Ssewakiryanga, who succeeded Nyamugasira as executive director at NGO Furum in…, described him as a leader who did a lot in the field of research and policy analysis in the civil society.

A statement released by Center for Governance and Gender Equality read in part, "the untimely death of Warren Nyamugasira comes as a big loss to the civil society fraternity in Uganda in 2016".

He graduated with a Bachelor of Arts in Economics from Makerere University in 1978. In 1992 he enrolled at the University of Swansea, UK for a master's degree in cconomics.

He has been a major figure in the civil society organizations with over 35 years of experience in development work.

He was also the executive director NGO Forum between 2001 and 2008.

By the time of his death, Nyamugasira has been the executive director for Development Research and Training, a local research a firm. Nyamugasira was also a regular contributor of opinion articles in the New Vision newspaper.

When he was requested to contribute opinions in the newspaper, Nyamugasira said, he was passionate about the youth and how they can have a stake in a stable and growing economy and how this can be done from the available resources.

"I am also interested in the role of aid and trade in poverty eradication; the politics of poverty, the role of agriculture and the smallholder farmer and other development-related work where constructive opinions can help," he said.

In one of his emails to the New Vision opinion editor Isaac Omoding, Nyamugasira noted that he was privileged to be a contributor and noted his passion.

"I would be honored to be listed thus. I am currently passionate about how we can integrate the youth into and ensure they have a stake in a stable and growing economy and how this can be done from the available resources. I also interested in the role of aid and trade in poverty eradication; the politics of poverty, the role of agriculture and the smallholder farmer and other development-related work where constructive opinions can help."