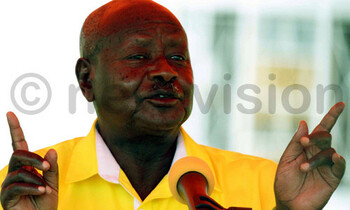 PRESIDENT Yoweri Museveni has directed the Minister of Local Government Adolf Mwesige to immediately liaise with the Chief Administrative Officers and ascertain why no disciplinary action has been taken against fisheries officers involved in illegal fishing and trade in connivance with the Beach management Units and committees.

“If those officers have failed in their supervisory roles, they should be dismissed. Those complaints should be investigated immediately and disciplinary action taken. All Fisheries Officers should stop their activities in connection with Fisheries standards Enforcement because they are the problem,” he said.

Museveni also directed the Minister of Agriculture, Animal Industry and Fisheries Tress Buchanayandi to stop forthwith the activities and operations of the Beach Management Units and Committees and for Fisheries Officers to stop their activities.

In a letter dated November 11, 2015, the President said he has been receiving complaints about the manner in which beach management officers, Fisheries officers and police officers and other employees of the Fisheries department have been carrying out their enforcement activities and the illegal activities they are involved in including illegal fishing and trade, extortion of money from fishermen, corruption, connivance with fishermen to use illegal fishing methods, gears and trading in immature fish.

“These illegal activities have led to the depletion of fish in the lakes which has immensely affected the economy in terms of closure of fish factories, loss of jobs, investors etc.

These people are also involved in mistreating fishermen who do not cooperate with them. Sometimes, they prefer criminal charges against them. As such the purpose for which they were created has not been fulfilled,” he said.

The President wants the Ministry to come up with strict guidelines on their operations, activities, elections and dismissal.

He has also directed that Fisheries Officers and employees of the fisheries department who have been engaged in illegal fishing activities should be investigated in liaison with Resident District Commissioners and disciplinary action taken.

In a separate letter to the Inspector General of Police General Kale Kayihura, the President directed the immediate withdrawal of all the Police officers involved in the enforcement of fisheries related matters until the Ministry of Agriculture puts a proper mechanism in place.

Museveni also directed the investigation of police officers implicated by the fishermen and community members and take the necessary action against them.