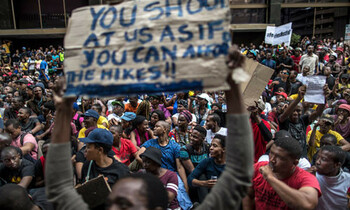 Thousands of students demonstrated against proposed rises in university fees, with some tearing down security fences, setting fire to portable toilets and hurling bricks at police.

In running battles close to the Union Buildings where Nelson Mandela was inaugurated president in 1994, police repeatedly clashed with stone-throwing protesters as students fled for safety.

"Our policemen and women... showed remarkable professionalism even under extreme provocation from a section of students," Police Minister Nathi Nhleko said in a statement after Friday's protest.

"The police showed the necessary control but in the end had to assert and maintain law and order to protect those who came to protest in peace."

No serious injuries were reported in the violence, which came after a week of growing demonstrations against fee rises that many students say would mean poorer black youths were unable to study for degrees.

President Jacob Zuma on Friday announced that all university fee increases next year would be scrapped after he held talks at the Union Buildings with student leaders and university officials.

Zuma had been due to address the volatile crowd outside, but instead read a short statement at a televised press briefing.

Seven protesters were reportedly arrested at the demonstration in Pretoria, while clashes also erupted between police and students in Cape Town.

Earlier this week, hundreds of students incensed by the plans to hike fees by up to 10 percent stormed the gates of parliament in Cape Town.

Campus activism has been on the rise in South Africa, where frustration is focused on continuing racial inequality, government corruption and youth unemployment 20 years after the end of apartheid.