Russia to hold key Syria talks with US, Saudi Arabia and Turkey

The top diplomats from Russia, the United States, Saudi Arabia and Turkey will hold talks on the war in Syria Friday, after Moscow thrust itself into the heart of the conflict with its bombing campaign in support of President Bashar al-Assad. 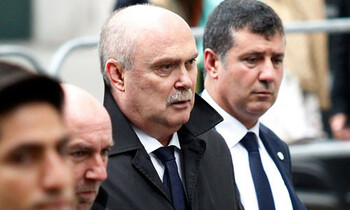 The top diplomats from Russia, the United States, Saudi Arabia and Turkey will hold talks on the war in Syria Friday, after Moscow thrust itself into the heart of the conflict with its bombing campaign in support of President Bashar al-Assad.

The envoys from Washington, Riyadh and Ankara -- all of which back groups battling against Assad -- will look to sound out Russian Foreign Minister Sergei Lavrov in Vienna after the embattled Syrian strongman made a surprise visit to Moscow to meet President Vladimir Putin this week.

On September 30 Russia launched air strikes in Syria which have shifted the dynamics of the brutal four-and-a-half year war -- allowing Assad's battle-weary forces to go on the offensive and overshadowing a US-led coalition bombing the Islamic State (IS) group.

The US and its regional allies have decried Russia's strikes, insisting Moscow is not mainly targeting Islamic State as it claims, but other groups battling the regime in Damascus, and that the Kremlin's intervention will only prolong the fighting.

Ahead of the talks in the Austrian capital, Assad's fate remains a major a stumbling block and, after years of failure to stop the bloodshed in Syria, there was scant hope of any major breakthrough.

Washington and its regional allies have long insisted Assad has to go for there to be any chance of a political solution to fighting that has cost more than 250,000 lives, but Moscow says it must first help him defeat IS and other "terrorists" before talks can start on any reforms.

"The aim of the US is to get rid of Assad, probably that is so, our aim is to defeat terrorism, to battle terror, and to help President Assad claim victory over terror," Putin said Thursday in the Black Sea resort of Sochi.

"In this way, we can then create the conditions for the start and, I hope the successful reaching of a conclusion, of the political process to find a settlement."

Meanwhile, US Secretary of State John Kerry said in Berlin that while all sides agreed on the need to find a political solution and battle IS only "one thing stands in the way... a person called Assad -– Bashar al-Assad".

Assad's surprise visit to Moscow on Tuesday -- his first known trip abroad since the start of the Syrian conflict in 2011 -- has now placed the Kremlin as the key link to the strongman.

Putin -- who has been isolated by the West for some 15 months over the Ukraine crisis -- went on a diplomatic blitz in the wake of the visit by Moscow's long-standing ally, calling the leaders of Saudi Arabia, Turkey, Jordan and Egypt.

While all sides seem entrenched in their positions, analysts say some Assad opponents seem to be softening their line and conceding that he could remain in power temporarily, while Moscow does not seem wedded to the strongman long-term.

Another staunch Assad ally that will not be at the table in Vienna -- due to objections mainly from Saudi Arabia -- is Iran, but even officials in Tehran say they would not work to keep him in power "forever".

While Syria is set to dominate in Vienna, Lavrov and Kerry will also hold talks with representatives from the European Union and United Nations on the latest round of Israeli-Palestinian violence.

The talks -- to include the EU's foreign policy chief and UN head Ban Ki-moon via video-link -- are part of a flurry of diplomatic activity seeking to end weeks of violence that has raised fears of a new Palestinian intifada, or uprising.

Kerry on Thursday expressed "cautious optimism" about defusing the crisis after a four-hour meeting with Israeli Prime Minister Benjamin Netanyahu in Berlin.

Russia to hold key Syria talks with US, Saudi Arabia and Turkey