The Ugandan Parliament has been commended for the actions taken to promote women and girls rights. IPU Chairperson Mensah Williams paid a glowing tribute to Speaker Rebecca Kadaga 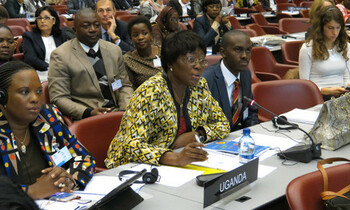 Ugandan Parliament has been commended for the actions taken to promote women and girls rights.

Speaking during a meeting of the coordinating committee of women Parliamentarians of the Inter Parliamentary Union (IPU), Chairperson Mensah Williams of Namibia paid glowing tribute to Speaker Rebecca Kadaga and the Ugandan legislature, following a report of the activities so far been carried out in the Parliament of Uganda.

Oyam South MP Betty Amongi who briefed the meeting, spoke on the success of the first ever Women’s Parliament held in Kampala on July 7, 2015 under the theme Women’s participation and empowerment: Addressing challenges of Convention of Elimination of Discrimination Against Women (CEDAW) implementation.

“It brought women from the grassroots together with male Parliamentarians, the donor community and had all the UN representatives in Uganda attending,” Amongi said.

The Women’s Parliament culminated into the launching of the “Call for Action” hand in hand with the “He for She” campaign.

“Congratulations to the Uganda Parliament,” Mensah Williams said, adding: “I think that that is what we all need to do to encourage for signatures; for people to take cognisance of the He for She campaign’ and the call for action that we committed to.”

Kadaga highlighted that these successes were not without their challenges: “I must express my frustration with the Executive back home,” she said, while explaining about the presentation of the report on the Convention on the Elimination of All Forms of Discrimination against Women (CEDAW) in Parliament of Uganda. Imagine, all five ministers concerned went missing at the time of tabling the report.”