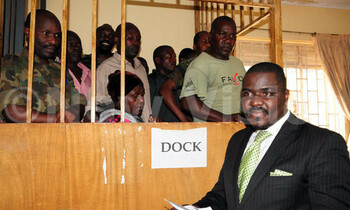 A soldier has testified against an army Captain who was allegedly involved on Kabamba army barracks attack in Mubende along with 13 others to overthrow the Uganda government.

Bakwanya told court that Capt. Hillman Bosco Aleper, formerly of the Armoured Warfare Training School in Mubende, contacted him to go to the hotel where he attended a meeting with the accused persons.

Bakwanya, who is currently attached to Chief Military Intelligence (CMI), said he attended the meeting as a spy after tipping top military officers.

The accused presented his testimony under the guidance of state prosecutor, Maj. Fredrick Kangwamu.

During the meeting, he said, Capt Aleper suggested the use of arms to oust the government and was elected the leader in charge of recruitment and supplies of ammunition.

The court also heard that the accused had formed a rebel group called Uganda Democratic Federation (UDF) which was allegedly sponsored by supporters from America, Australia, Sweden and the Sudanese President Omar al-Bashir.

Testifying as the fourth prosecution witness, Bakwanya said Capt. Aleper told him to mobilize soldiers from the; east and north east. He added that the accused, who spent three months planning for the attack, patrolled Kabamba barracks at night.

During cross examination by defence lawyer Jude Mbabaali, Bakwanya confirmed that the accused had prepared to break into the armoury to get big guns which would be used to fight against government.

At one point, he said the accused raided a place in Bombo town opposite post bank guarded by Saracen guards to get guns. He added that more guns were bought from soldiers who resided at Magamaga barracks in Jinja.

Prosecution alleges that between September 2013 and May last year in Kampala, Masaka, Wakiso, Luweero and Nairobi in Kenya, Lt Col Eguma, Capt Aleper and their co-accused engaged in subversive activities and attacked the Armoured Warfare Training School in Mubende.

It is further alleged that in the same period, the accused consciously omitted to disclose vital information to the army authorities about the recruitment of people to engage into activities that prejudice the security of UPDF and preparations to attack the training school.

The case was adjourned to October 21, for further hearing.