As you all know, Monday, 5th October, was the national teacher's day. Here in Kampala, at the Lugogo Cricket oval to be specific, a beaming President Museveni took his place as Guest of honor. 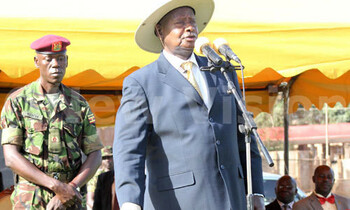 As you all know, Monday, 5th October, was the national teacher's day. Here in Kampala, at the Lugogo Cricket oval to be specific, a beaming President Museveni took his place as Guest of honor.

Once all the protocol was observed, trivia exchanged, he took to a rather wavy tale of Uganda's Education sector. Trust the chatty president not to leave any stone unturned, excite and step on a few toes at the same time.

He did not have a choreographed speech, matter of fact; his speech was weaved out of the many issues discussed, his experiences and even comments from the audience.


The start
Using his personal tales, Museveni took a walk down Uganda's education journey. It was a tale that seemed to sum up the journey of Uganda's Education sector since the 1950's to its current state. He narrated of a time back in the 1950's into the 60's when he was a lad pursuing his education. He said that back then, only a few folks went to school and when you did, everyone supported you as you were one in a few. "When I was going to school, I would get half bursary!" a jovial Museveni confessed.

See; that he said was through his O' level in Ntare School located in Mbarara district. Even the half fees he was paying would soon be scraped upon reaching the advanced level to nothing. "As a matter of fact, when I went to A' Level, we were paying nothing, and was instead paid some money!" he exclaimed to the astound lot of teachers. Noticing the teachers' mumbling, Museveni explained why Government, had taken to paying students that made it to A' level. "You see in 1961, there were only five or six schools that had A'level," he said. The schools were; Buddo, Kisubi, Ntare, Gayaza and later Nabingo.

He said that it was that way because Uganda did have secondary schools offering A' levels, as it was merged with the University curriculum. "So, if you were a medical student, you would graduate after 8 years," he starts. "The first two years, were called the intermediate years, the next five would be medical school and the last year was for internship." Later, the intermediate course was detached and merged with the secondary level to provide for today's advanced level or as it was called then; High School Course (HSC).

Museveni then argued that this kind of education that was for a selected few brought forth a disparity like no other. Yes, the country had literates nut only a few and more than half of the population could barely read and write. "By 1986 when we came to Uganda, the literacy rate was I think about 43%," he started. "That is why, when we came to power, we said no, we need to introduce mass education. So we introduced Bona basome!" By Bona Basome, the president meant Uganda's free Education programs that have been running since 1997.

Mass education
Soon, the president was back to his chatty self. He told of a time back in 1964 to 1965, and later 1967 when he taught as a licensed teacher. "I looked at the situation, the penetration of education was very narrow," he says. "A school like Ntare had two streams for each class; A and B." Each stream he recalls had a mere 40 students, whilst the Advanced level only had one class each that had 40 students, with 20 doing sciences and the other 20 doing arts.

"That means O'level had only 320 students and A'level had 80 students," he noted with concern. He recalls that they walked around the village with pride, at some point; you find that said child was the only one in school in his entire village. That, Museveni said, was what drove the need to open the path ways for many more to access education.

Again as you all know, a Museveni speech without a proverb is no speech at all, right? To explain this decision, Museveni told of a Lunyankole proverb of the many little animals that combined to kill a big snake. He went on to give another proverb of a safari ant that he called 'ensanafu' and a calf. "When one ensanafu bites one calf, the cow will not worry. But if they grew in numbers!" he completed amid bouts of laughter. That he said was the strategy that he decided to take on, you know; have as many Ugandans accessing education other than just the few.  He then jokes of how his government sought to have more ants: "When we came, the NRM line was; twagala ensanafu nyinji."

Managing mass education
He suddenly gets serious and starts to explore the issues that arise with the mass education, in a bid to explain what many would view as a shortfall in the whole education system. He starts by explaining why government cannot just give 100% salary increment in one bit, even if they would love to. "When we talk about salaries, you should keep in mind the fact that the teachers are now many," he said. "If you were 80.000, we would have paid, but now you are double," he explained even further. He then joked of how the teachers might be saying that he increased the number of children in school and cut of their food. He then strengthens them, and says that he is aiming higher and that all will be well.

Suddenly, a jovial Museveni's face turned into a frown, no doubt, he was ready for his next point of discussion. "This brings me to the issues of school charges, especially schools in the rural areas," he said quite easily. He wonders if those bringing school charges believe that the parents in these rural areas can manage. He then blames the rural literate who he says sit in some of the Parent Teacher Association (PTA) boards and come up with these fees.  He then tells of a meeting he had in Ibanda South, on the issue of school charges.

He then said that with Bona bagagawale scheme; also known as poverty eradication schemes, Museveni believes that in a few years, these parents will be able to meet the charges. He was back to joking tone when he next spoke, this time with his signature mug of tea. "I rushed from a meeting, I did not have time to sip tea," he said. Then he playfully muttered words in Luganda to mean he was going to sip his tea, "Nenyewre ku ka chai kange!" But this comic pause was meant to drive another point home, one where he believed the parents should pack a little something for their child as they leave for school in the morning.

Ministry and teachers' woes
See, earlier on, the Uganda National Teacher's Association (UNATU) secretary general, James Tweheyo had bared all about the troubles the teachers were going through. "84% of teachers want to quit in the next two years," the immensely vocal Tweheyo told of the teacher's dilemma. He said that the shs 25 billion given by the president to the teacher's circles was being stalled by the ministry. He lamented of the extra taxes levied on private school, delayed salaries and pensions, death of pupils due to lightening among other things. Like a child reporting to their father, Tweheyo was not kind to his 'guardian'; ministry of education, sports, science, and technology.

And indeed, like a father soothing a wailing child, Museveni started: "I am not happy about this people, abatulugunya absomesa." Yes, he blended English and Luganda to mean that he was not happy with those hurting teachers. "Commissioner ayogede ku kasente kaafe aka circle. Agambye simanyi solista general, simanyi bichi," he added to mean that the commissioner had spoken of the moneys for the circles, dropping names and things here and there. A vocal Museveni did not want to hear, and quickly demanded the Assistant commissioner for primary education Tony Mukasa-Lusambu, explain to the teachers what is going on.

"Government can give a grant to anybody," he started. "When I go and give a grant to a church, I use public money. Do not think that I go and sell my cows, no," he said. He then said to let the money do as was planned as it will treated as public funds. He also demanded (in-spite of pleas by Mukasa-Lusambu for an increment of the education budget), that areas exposed to lightening be looked into. Sadly, the key ministry officials were visibly absent from the teacher's day celebrations and Lusambu had to take the entire wrath.

Next the president's guns were pointed at the Chief Administrative Officers (CAOs). "Omusoga agamba, okulambala," he said to mean the Musoga says sleep. He accused the CAOs of sleeping and delaying the process of salaries by not getting back to the ministry of finance in time. But he really wanted to know who was delaying the salaries of teachers.

Soon he was discussing the issue of grades, and appreciating teachers that had been in service for long. He said that if a teacher had been in service for long, however tiny, that should reflect on her pay and he ordered the commissioner to look into that. Finally, he promised to also look into making 5th October, a public holiday. "If we add one more day, Uganda will not end!" he said amid thunderous applauds from the now charged teachers.