EXPERTS have called for lightning rods to be installed in schools, as a new book ranks Uganda highest with the most lightning fatality incidences 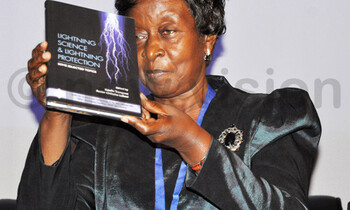 EXPERTS have called for lightning rods, down conductors and other anti-lightning equipment to be installed in schools, as a new book on Lightning Science ranks Uganda highest with the most lightning fatality incidences.

Experts attending the 13 governing council of the NAM S & T Centre at the Commonwealth Resort in Munyonyo, Kampala, expressed that school-going children were the most killed by lightning when it struck, calling for “special anti-lightning gadgets” to be installed in school buildings to carry lightning’s electricity safely into the ground.

The NAM S&T is the Centre for Science and Technology of the Non-aligned and Other Developing Countries. It has 47 member representatives from Asia, South America and Africa.

“You hear that lightning has struck: 11 pupils killed, 50 hospitalized. But we have to do something to provide children with safe classrooms they can shelter from lightening,” said Prof. Arun P. Kulshreshtha, the NAM S&T director general, when presenting the book with the alarming lightning fatality incidences.

According to the book, Uganda suffers approximately 70 lightning strikes per kilometer a year. Entebbe and Tororo towns are some of the most hit areas.

Water and Environment minister Ephraim Kamuntu last month warned of possible mudslides, floods, lightning, and other disasters that come with the rainy season.

The minister said the September-December rains were approximated to peak in November. The meteorological department predicted the rains might include the heavy el-nino downpours.

Dr. Mary Ann Cooper, a leading authority on lightning injuries, said nearly half of the newspaper reports of lightning deaths in Africa and Uganda have been to school children.

“Yet, a school is often the most substantial building in a community. Thunderstorms more often occur during day when there is a good chance that the kids would be in school,” says Cooper.

The fact that typical Ugandan rural schools are a brick and mortar building with a sheet metal roof and dirt floor only escalates the chance of pupils to be hit by lightning when it strikes.

“The roof doesn’t protect those inside because lightning that hits it can jump directly to the ground inside the building, injuring or killing those in or near its path,” said the experts.

The book launched, Lightning Science & Lightning Protection, indicates that while Uganda tops the charts in the whole world for the number of human and animal casualties due to lightning, Mauritius ranked number one for the loss in infrastructure due to lightning.

The antenna with multiple sensors is able to pick lightning data from the clouds using its remote sensing and process it before wiring it to telecom companies, who in turn will relay the warning to the target.

The commissioner for Meteorology, Michael Nkalubo, last year said the Authority had also set up an upper air and wind machine (that measures the temperature in the atmosphere) and was in the process of installing a wind-shear alert system “to secure Ugandans.”

But despite the innovation, more people continue to be hit by lightning.

Edmund Ataremwa, the head of the African centre for lightning and electromagnetics said: “The simple rule is that when you see lightning or hear thunder, no matter how far away, take shelter in a substantial building – one with electrical wiring and plumbing – or in a vehicle with a hard top.

“But most of our schools are not fit with electrical wiring or plumbing,” he said.

During the Function, hosted by the Uganda National Council for Science and Technology (UNCST), another five books on minerals, energy, Information Communication Technology, were launched.

Dr. Theresa Sengoba, the UNCST board chairperson, said the conference was a follow-up on the resolution of an earlier meeting held in Zimbabwe.

The conference attracted representatives from over 20 countries from Asia, South America and Africa.