Brazil coach Luiz Felipe Scolari has admitted that a last-16 tie against Chile was not what he wanted. 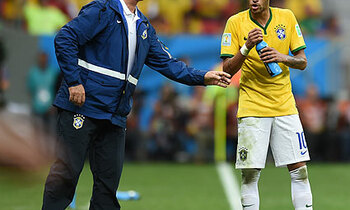 BRASÍLIA - Brazil coach Luiz Felipe Scolari on Monday insisted that his side are getting better all the time but acknowledged that a last-16 tie against Chile was not what he wanted.

The World Cup hosts clinched first place in Group A after a Neymar-inspired 4-1 win against already-eliminated Cameroon at the National Stadium in Brasilia.

And the result ensured that they would face Group B runners-up Chile, beaten 2-0 by the Netherlands earlier in the day, in Belo Horizonte on Saturday.

"I feel good now that we have qualified and I am thinking about my team. I know that they are going to keep improving," said Scolari after seeing Neymar score twice and Fred and Fernandinho also find the target.

"I have played against Chile two times before and I know how difficult a side they are. Some people think we will beat Chile easily but they are a quality side, well organised.

Brazil and Chile are familiar foes, having met each other twice in friendly matches since the return of Scolari for a second spell as coach.

In April last year the sides drew 2-2 at the Mineriao in Belo Horizonte, the same stadium where they will meet on Saturday, with Neymar scoring one of Brazil's goals that day.

Then, last November, Brazil emerged 2-1 winners in a friendly played in Canada, with Hulk and Robinho scoring either side of an Eduardo Vargas goal for the Chileans.

true
The brilliant Neymar once again inspired his team by scoring two of their four goals against Cameroon. PHOTO/AFP

true
Despite the Cameroonians putting up a spirited fight, they were eventually subdued by the hosts. PHOTO/AFP

true
Fred put up a much improved performance in Brazil's game on Monday, finding the net in a 4-1 thumping of Cameroon. PHOTO/AFP

Those results indicate that this encounter will be a tough one to call, especially with Chile having impressed in qualifying from their group ahead of 2010 world champions Spain.

And Chile will be eager to get revenge for defeats suffered at the hands of Brazil in the last 16 in each of their last two appearances at the World Cup.

Current form suggests this should be a much closer affair, but Scolari is pleased with the way his side have improved since the start of the tournament as they progress from their group with seven points taken from a possible nine.

"We are almost at the ideal level and it is important to be at that level going into the knockout rounds," said the 65-year-old Scolari, who coached Brazil to glory at the 2002 World Cup.

"Now we need to commit fewer mistakes. In the group stage you can get away with slipping up once as long as you win your other two matches. Now you can't afford to because one goal can decide a match.

"Today (Monday) we scored goals and improved yet again. In the next match we will need to improve a little bit more again to beat a very good Chile team.

"Sometimes we wanted to do too well. We need to calm down. I thought we played well. We had to correct some things at half-time but after that we did better in the second half."

true
Netherlands midfielder Leroy Fer rose above all to head in the first of two goals against Chile. PHOTO/AFP

true
Chile's Alexis Sanchez will be a man to watch against Brazil. PHOTO/AFP

true
Chile fans will hope that their side beats favorites Brazil for a place in the quarter finals. PHOTO/AFP

Brazil will return briefly to their training base in Teresopolis, outside Rio de Janeiro, to prepare for the clash with Chile and Scolari will consider possible changes to his starting line-up.

He is likely to remain loyal to Fred, the under-fire striker who broke his World Cup scoring duck with Brazil's third goal against Cameroon, but Fernandinho made a compelling case for inclusion in the starting line-up after his fine performance as a substitute.

The Manchester City midfielder, 29, replaced off-colour Paulinho at half-time and had a part in Fred's goal before completing the scoring late on.

"Fernandinho made a timely contribution, both defensively and in attack. He works well every day in training," said Scolari, who was also happy to see Brazil relying on the class of Neymar.

"We depend on Neymar like Argentina depend on (Lionel) Messi. The top level players make the difference in all teams and Neymar participates in so much of what we do."