The civil society is concerned that the 2014/2015 national budget presented by the minister of finance, Maria Kiwanuka did not reflect the aspirations of Ugandans saying women and youth got a raw deal. 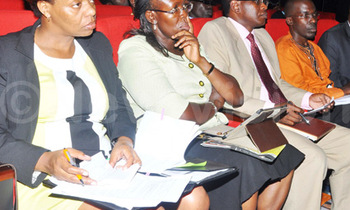 The civil society is concerned that the 2014/2015 national budget presented by the minister of finance, Maria Kiwanuka did not reflect the aspirations of Ugandans saying women and youth got a raw deal.

The activists under the umbrella of Civil Society Budget Group (CSBAG) criticized the government for introducing new taxes on fuel.
“The budget is not pro poor and not for women. Critical issues on education sector have not been addressed instead we see a decrease of money allocated to education from 1800b (last financial year 2013/2014) to 1699b this financial year,” Patricia Munabi the executive director, Forum for Women in Democracy (FOWODE) said.
true
The executive director of Forum for Women in Democracy (FOWODE), Patricia Munabi (L) and the chairperson of Uganda Women's Network (UWONET), Sheila Kawamara during (C) listening to Nickson Ogwal an official from Action Aid Uganda during the civil society budget listening Conference in Kampala. PHOTO/ Francis Emorut
She said the finance minister did not elaborate concrete proposal on how to deal with youth unemployment apart from that private sector will be creating more jobs.
“Taxes on salt, sugar and paraffin are against women in the country who substantially use these items on daily basis,” she said.
Munabi was supported by the former ESO boss, David Pulkol who said tax on sugar was depriving children of the basic need while the rich who already have diabetes do not need it.
Sheila Kawamara the chairperson of Uganda Women’s Network (UWONET) pointed out that the minister chose her words carefully playing some politics by saying the budget reflects the common agenda for all Ugandans.
“The minister has run away from explaining youth unemployment strategies but is prioritizing the ministry of defence by allocating sh1trillion. Why such enormous amount when the country is secure?” Kawamara asked.
The activists made the remarks during the civil society budget listening conference in Kampala.
Kiwanuka earmarked sh14trillion, an increase from sh13.1trillion in the last financial budget.
The ministry of works and energy took the largest share of this financial year budget with 18% and 12% respectively while education got 11.9% and 8.4% for health.
true
Julius Kapwepwe (L) the director of programs at Uganda Debt Network (UDN) and Fred Kawooya, the head of agriculture at Action Aid Uganda during the  civil society budget listening Conference in Kampala.  PHOTO/ Francis Emorut
“The people of Teso will continue to suffer since they did not mention anything on revamping the 91 valley dams in the region which are critical for agriculture,” Fred Kawooya the head of agriculture program at Action Aid Uganda said.
Julius Kapwepwe the director of programmes at Uganda Debt Network (UDN) noted that the 2014/2015 budget was a populist aimed at the 2016 elections.
He hinted that the government’s soar relation with development partners is beginning to bite.
“The budget didn’t address critical issues such as youth unemployment, health and others but rather is a populist budget and the poor relations of donors with government due to corruption scandals is beginning to bite,” Kapwepwe said.
Dr. John Mutenyo from Makerere University pointed out that the budget didn’t take into consideration the issue of East African Community regional integration.
“How has Uganda positioned itself to compete with EAC integration?” Mutenyo asked.
He cited Rwanda who bought electric transformers and gave them free but in Uganda transformers remain a property of UMEME
RELATED STORIES
CSOs want 2014/2015 budget focused on agriculture, health & education
CSOs push for open contracting by gov’t
MPs advise CSOs on budget research
CSOs want special committee on secret budget outlay
AG cautions CSOs against criticising Gov’t
Musicians, CSOs kick off sexual reproductive health campaign in institutions

Women, youth got a row deal in the Budget-CSOs