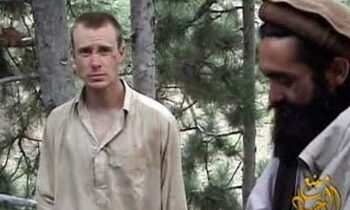 But despite the Taliban's "great happiness" over the prisoners' release, a spokesman for the militant group cautioned the exchange was "not political".

The five prisoners were named as Mohammad Fazl, Norullah Noori, Mohammed Nabi, Khairullah Khairkhwa and Abdul Haq Wasiq, all influential former officials of the Taliban regime driven out of power in the US-led invasion of Afghanistan after the 9/11 attacks.

They were swapped for Idaho native Bergdahl, who disappeared in June 2009 from a base in Afghanistan's eastern Paktika province.

He was the only American soldier held captive by Taliban militants in the nearly 13-year war.

Ismail Qasimyar, of the peace council, said: "I think it shows all sides' goodwill for trust building and start of the peace talks in near future.

true
Freed American soldier Bowe Bergdahl's parents Bob (R) and Jani Bergdahl speak to the press during US President Barack Obama (not pictured) apreviously unscheduled appearance in the Rose Garden of the White House on May 31, 2014 in Washington, DC. AFP PHOTO

"Especially it shows the government of Afghanistan's commitment toward peace talks. We are very optimistic that the release of these senior Taliban will help the peace process."

He added that the council together with the Afghan government had been part of the negotiations for a long time.

"In fact, a member of the national security council of Afghanistan went to Guantanamo to seek the possibility of releasing senior Taliban around 10 months ago," he said.

A Taliban statement said the five men were released with the help of the Qatar government and have now joined their families there, adding the move had brought "great happiness and pleasure to (the) Afghan nation and particularly to the Islamic Emirate Mujahideen."

Later speaking to AFP, Zabihullah Mujahid, a spokesman cautioned against reading too much into the exchange.

"It has only been an exchange of the war prisoners, there is nothing political in it, it has not been done for peace process," he said.

The Taliban leadership has publicly refused to engage with the Afghan government, accusing President Hamid Karzai of being an American puppet.

Nevertheless some moderate elements are believed to have broken ranks and engaged in dialogue.

The High Peace Council is a government body which was created by President Hamid Karzai to negotiate with the Taliban after their ouster in 2001.

It was initially headed by Burhanuddin Rabbani, a founder of the mujahideen movement and former president, until he was assassinated in 2011. It is now led by his son Salahuddin.