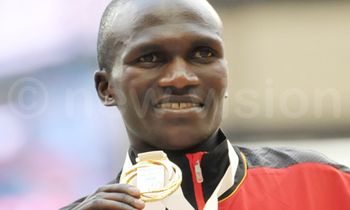 As a way of boosting speed, organisers have bonuses for all runners with times under two hours 11 minutes in the men’s race and 2:28:00 in the women’s event.

There is also $125,000 (sh320m) waiting to be won should Uganda’s Olympic and World Championship gold medalist set a world record.

Wilson Kipsang, who holds the men’s record at 2:03:23, will be one of the stars that Kiprotich will be up against.

Gordon Ahimbisibwe, who was Kiprotich’s coach as he ran to Olympic glory in 2012, is confi dent the athlete can shine again in London.

“Asking for a world record might be too much. But winning shouldn’t come as a surprise, at least going by his Olympic and World Championship victories,” said Ahimbisibwe.

Kiprotich has been training in the Kenya highlands for the marathon for the past two months.

Apart from the time bonuses, big names like Kiprotich have appearance fees. And to help the runners with their times, the London marathon also employs pacesetters.

Paris marathon winner Stanley Biwott, Martin Mathathi, who won the Fukuoka marathon and double Olympics champion Mo Farah, are also part of the field that is seriously eyeing the huge prizes at stake.