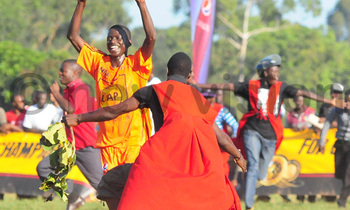 MUBS football team coach Charles Ayieko has warned Kampala University to wake up or they will not defend their Nile Special University Football League trophy this year.

In a post-match interview after his team emerged 1-0 winners over KU at MUBS Arena, Ayieko said that KU were lucky to concede only a single goal on Thursday. Stephen Ogwal was the hero with the lone goal in the 62nd minute.

“For me this is an early Christmas because KU tortured us the whole of last season. They have also beaten us in Dar es Salam (East Africa University Games), Inter-University Games in Mukono,” an excited Ayieko said.

“But they will need to work harder to keep the title this time round because they ignored preparations for the competition and that is the reason they are really struggling,” he added.

As the match progressed, MUBS fans stormed the pitch halting play for a while as they protested second assistant referee Bob Omolo’s decision against their team. He was forced to swap ends with the first assistant before the match continued.

Gulu University caretaker coach Calvin Okello will do anything to avoid embarrassment when Ndejje University visit for their opening match at the Gulu campus on Friday.

Gulu University delayed to launch their Nile Special University Football League campaign last week despite earlier confirmation and Okello explained that it was due to a communication gap between the university and league organisers.

“Now that we have sorted out the gap my team is set and we hope to play with caution to avoid embarrassment because we don’t have big names on the squad but I’m sure everybody on the team will be out to show their pride,” Okello said after their final training session on Thursday.

The upcountry match will unusually kick off at 2:00pm to allow for Ndejje to return to Luweero thereafter.