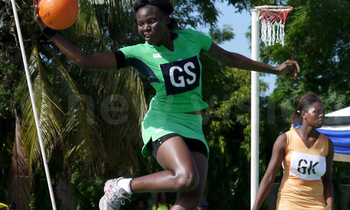 TITLE holders NIC are confident ahead of their semi-final encounter where they take on MOICT from Kenya at the ongoing East Africa Netball Club Championships scheduled for Friday morning at the National Stadium in Dar es Salaam, Tanzania.

The 14 times champions will have their dependable goal shooter Peace Proscovia back in action after recovering from an ankle injury she suffered during their game against fellow Ugandan side Prisons on Tuesday.

Proscovia has so far missed two training sessions but according to former captain Betty Namukasa, everything is under control.

“She is undergoing treatment and we hope she will be fine and hope to have her in the team in the semis,” Namukasa said on Thursday.

New Vision Sport paid Proscovia a visit at the team camp at the National Hotel in Kako a Dar es Salaam suburb and she said the swelling had reduced and that doctor has promised her that she will be fit to play.

“It seems I will be fine like the doctor said because I also don’t want to miss the game,” she said.

In the other semi Uganda Prisons will be playing against JKT from Tanzania later in the day.

While in the men’s contest other Ugandan side Kampala University will be up against tougher opponents and defending champions Kenya Prisons as JKT takes on fellow Zanzibar side Polici at the same ground later in the evening.