Belgian carrier Brussels Airlines announced an offer of $5,600 (about sh15m) towards the team's air travel to represent the country at the biennial event. Uganda finished fifth overall in the last edition 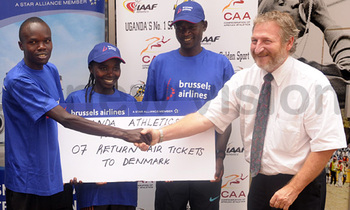 THE national Athletics team to the IAAF World Half Marathon championship due Saturday in Copenhagen, Denmark has been boosted by Brussels Airlines.

The Belgian carrier announced their offer of $5,600 (about sh15m) towards the team’s air travel to represent the country at the biennial event. Uganda finished fifth overall in the last edition in Karvana, Bulgaria.

“When we were contacted by the athletics federation about their plight, we felt that we needed to do something to see that we give the athletes exposure and also help them to fly Uganda’s flag high.”

“We are working for the development of sports and we are proud to see that this partnership rises again,” said Geert Lemmen, the country manager of Brussels Airlines as they handed over the tickets to the athletics federation president Dominic Otuchet.

The team flies out on Wednesday night and is expected to arrive in Denmark on Thursday morning, in time to acclimatise.

“We appreciate that corporate companies have come up to stand with us. We have done all the best to prepare the athletes and we are sure that we will have some good results,” said Otuchet at the hand over.

Experienced Geoffrey Kusuro, who has twice won the world mountain running championships, will captain the team that also has Daniel Rotich, Moses Kibet, Isaac Ayeko and Moses Kipsiro with Linnet Chebet as the only female on the team.