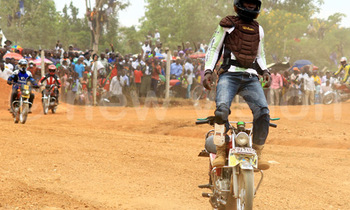 MOTOCROSS fans were on Sunday overwhelmed by the improved standards of motocross riders in Uganda but were more excited by the skills the bodaboda riders exhibited during the freestyle shows and left contented that Uganda has talents that simply need to be nurtured.

The bodaboda riders performed stunts while standing and sleeping on their bikes amidst cheers from the mammoth crowd that turned up for the event.

Maxime Van Pee proved that international exposure has improved his standards a lot as he had a one man show in the MX1 category beating challenger Arthur Blick Jnr and Talha Kiggundu with consummate ease.

“Winning is not the most important but the competition in my class was not so stiff as expected but I also think that it’s because of the training I do in Germany with Jurgen Coopers,” Maxime stated after the event.

Fortune Ssentamu excited the fans most when he took part in both the 65cc and 85cc categories respectively.

The 65cc defending champion competed in the category but participated in the superior 85cc class as practice on his new 85cc bike he received from Patrick Van Pee early last week before he upgrades to battle Alistair Blick and Ali Omar Senior.

He won the 65cc category but finished fifth in the 85cc category behind winner Alistair Blick and Ali Omar, Paddy Blick and Wazir Omar who finished second, third and fourth respectively.

Esther Mwangala finished second behind Byaruhanga in the 50cc category but emerged champion in the female category after collecting a total of 60 points, nine ahead of runners-up Isabella Blick.

The event was organised by Speedway Motorsport Club (SMOC).