President Yoweri Museveni has broken his silence on the resolutions made by NRM lawmakers that he holds the party flag for the 2016 general elections. 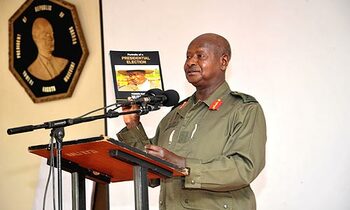 President Yoweri Museveni has broken his silence on the resolutions made by NRM lawmakers that he holds the party flag for the 2016 general elections.

Addressing lawmakers during deliberations on the resolutions contained in a motion that MPs signed at Kyankwanzi, Museveni said that he “welcomed” the decision by party members but assured the enthusiastic stalwarts that the final decision lies in the hands of the delegates conference.

“I welcome your resolution in the context of calming down confusion. Of course the decision as to who becomes a Presidential candidate is done by the National Conference of which you are members,” he told MPs.

The President further said that what pre-occupies his mind right now is the need to work on the roads and also stamp out corruption.

Museveni, who sources say, was surprised by the move by lawmakers to make him their beloved choice, added that: “. It is not correct to start jostling for positions especially when you are already in the structures.”

The President further told lawmakers that Uganda is not going to “disappear”.

“We have enough work to do; the roads, the challenge of corruption, safe water etc. At the right time we could have said what do we do because Uganda is not going to disappear?"

During the meeting that ended at midnight, the Prime Minister, Amama Mbabazi, who many thought was going to contest against Museveni for both the NRM’s and country’s top job, praised Museveni as “a good man” before he penned his signature on the motion.

Mbabazi also warned those who are bent on splitting the party by propelling rumours that he is fronting his name for the party top job. Mbabazi welcomed the NRM Parliamentary caucus resolution to have Museveni tender in his candidature for the country’s top job in 2016.

"There are people out there who realized that it was impossible to defeat the National Resistance Movement by democratic means and they imagine that the only way is to divide us from within. We must be very careful about those people. I have heard rumors that I had offered myself against President Museveni. Of course that is false. I have never," Mbabazi said.

At the same night, Vice President, Edward Ssekandi, also endorsed Museveni—a move that made his signature become the 204th on the motion to endorse Museveni that NRM MPs say would safe guard the party from internal bickering by fermenting cohesion and good governance.

At the same retreat, President Museveni also discussed the geopolitical position of Uganda in the Great Lakes Region and Africa, and explained to lawmakers why the interests of Uganda should be pushed first in every mission that the country takes in the region.

Museveni told lawmakers that his foreign policy puts national interest first and that it is also weaved around the Pan African cause that every leader in Africa must propel.

In the presentation titled: “The South Sudan Crisis,” Mahmood emphasized that the South Sudan crisis is a political matter that must be cured politically. But, the philosophical political scientist also praised Museveni’s decision to send troops to the conflict-eaten country.

The session on the geopolitical positioning of Uganda’s interests was chaired by Rujumbura MP, Major General Jim Muhwezi.