A fresh UN report reveals that Ugandan mothers are the least interested in breastfeeding in the east African region. 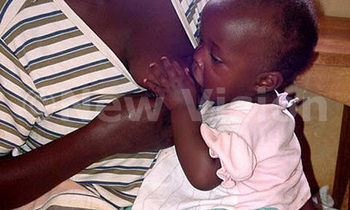 A UN report has shown that Ugandan mothers are the least interested in breastfeeding in East Africa, jeopardising the children’s brainpower and general body health.

Despite the revelation, a report by UNICEF shows that the number of children dying in Uganda before the age of five has reduced by about 61% over the past 12 years.

The report entitled; “Every Child Counts: Revealing disparities, advancing children’s rights”, was released on Thursday ahead of the 25th anniversary of the children’s rights convention in March.

As a result, the percentage of children suffering from the wasting syndrome, where a disease causes muscle and fat tissue to “waste” away, is higher in Uganda than in Rwanda where women are good at breastfeeding.

According to the report, wasting among Ugandan children stands at 5% compared to Rwanda’s 3%. Moderate underweight is highest in Uganda at 14% compared to the regional average of 10%.

Dr. Hanifa Bachou, a consultant nutritionist, explained that children who are not breastfed well are more likely to suffer from diarrhoea and respiratory tract infections than their counterparts.

“Breast milk is not only food. It is a complete diet for children in the correct amount to ensure their growth and development at that particular age. Studies have shown that children who are breastfed perform better than their counterparts in school,” Bachou said.

She attributed the low levels of breastfeeding in Uganda to lack of awareness among some women coupled with the new trend of modernity among the youth.

“Young mothers can easily mistake breastfeeding for being traditional. They claim that to look modern, you don’t have to breastfeed. In the process, they put the children’s future at risk,” said Bachou.

true
Some women introduce their babies to bottles way too early for fear of their breasts sagging.

Some women prefer to feed their babies on the less nutritious cow milk to prevent their breasts from sagging and becoming what is popularly known as “stockings” or “necktie breasts”.

In terms of under five mortality, however, the UNICEF report ranks Uganda ahead of most sub-Saharan countries like Kenya, Burundi, DRC, Ghana, and Mali. Other countries which Uganda beats include Guinea, Guinea-Bissau, Chad, Angola, Nigeria, Malawi and Niger.

Sierra Leone has the highest number of deaths among under five children in the world.

The agency drew its data from various national surveys and from routine reporting systems of UN organs.

The report attributes the reduction in mortality to efforts such as mass immunisation of children, mass distribution of insecticide-treated mosquito nets to prevent malaria and the nutritional well-being and health.

However, Uganda still trails Tanzania and Rwanda whose under five mortality is 54 and 55 per 1,000 live births respectively.

The under five mortality rate (U5MR) is used as the principal indicator of progress in child well-being. UNICEF observed that tremendous progress has been made since the Convention on the Rights of the Child was signed in 1989.

In 1970, about 17.1 million children under the age of five were dying every year. In 2012, by comparison, the estimated number of children who died before their fifth birthday stood at 6.6 million. The UNICEF report tallies well with the 2011 Uganda Demographic and Health survey.

Experts say breast milk is not only food. It is a complete diet for children in the correct amount to ensure their growth and development at that particular time.