In the Uganda over 3,577 women are diagnosed with cervical cancer annually. 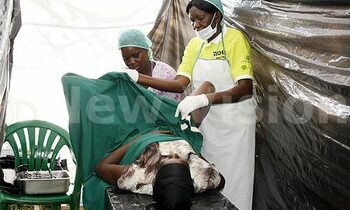 In the Uganda over 3,577 women are diagnosed with cervical cancer annually.

Dr. Fred Okuku of Uganda Cancer Institute in Mulago National Referral Hospital said that in the last three years alone, the number of cancer patients shot up with over 60% of the patients presenting advanced cases of the cancer.

“Cervical Cancer is now present at 18 years and not 35 years (as it used to be) because many girls are starting sex at a much younger age,” he said.

The whole country has only 35 cryo therapy machines, with 15 machines in 14 government referral hospitals and one health centre 4 in Nakasongola, according to Dr. Collins Tusingwire, Acting Commissioner for health Services in the Ministry of Health.Cryo therapy machines are machines used for early detection of cancerous cells.

Zach Akinyemi, the Programme for Accessible Health Communication and Education (PACE) Executive Director, said last October that a total of 20 cryo therapy machines were given to 20 private health centers on the ProFam network, in different parts of the country.

Women from northern Uganda (Lango sub-region) were glad to get breast and cervical cancer screening tests.  Over 1833 women were screened, counseled and treated during the exercise organized by Isis WICCE; 631 women came from Amolator, 484 from Otuke and 781 came from Lira.

The week long exercise revealed that most women had never had medical attention following the rape and sexual violations they experienced during the war against the rebels of the notorious Lord’s Resistance Army.

Dr. Tom Otim, a gynecologist at Lira hospital said that 100 women turned out to be surgery cases, 30 women showed early signs of cancer or abnormal changes and 13 women were positive with cervical cancer.

After screening the medical team identified and treated the commonest condition; 1521 women had chronic pelvic pain, which is a symptom of pelvic inflammatory disease (PID). PID is caused by infections that could have risen from the sexual violence or other infections but becomes chronic due to lack of medical care.

Chronic pelvic pain was common among most women who had been abducted and those displaced to IDP camps for several years.

Majority of the women (1191) assessed were formerly abducted and sexually abused and have suffered from lower abdominal pain for several years.

Dr. Otim also noted that most women expressed difficulty in performing manual work like farming. Since the community in Lira district is of mainly peasant farmers (88% of those assessed are peasant farmers) this implies that the women cannot easily engage in agricultural activities.

In addition, the lower abdominal pain poses a great challenge in the women’s sexual lives as many reported having painful sexual intercourse.