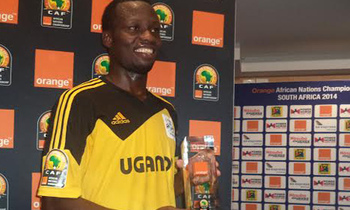 A reasonable number of Cranes players could fulfil their career dream moves to professional football this month.

All they have to do is continue impressing at the Africa Nations Championship (CHAN) in South Africa and it will not be long before scouts come knocking on their doors.

Yesterday, South African based football agent Ralph Nkomo, who has watched various games at the tournament designed exclusively for home-based players, revealed to South Africa publication KickOff that a sizeable number of representatives from local and international clubs are monitoring the matches with a view of discovering untapped talent.

“You must appreciate that there are several countries taking part in these games and this is what has attracted a number of scouts from inside and outside the country,” Nkomo said.

“There are scouts from France and Belgium together with representatives from some South African clubs,” Nkomo added.

“The transfer window will close at the end of this month. The tournament will be played until February 1 so there are many matches and many players to look at.”

Virtually every Cranes player performed to expectation against Burkina Faso on Sunday although Yunus Sentamu’s value skyrocketed after striking twice to earn Uganda a historic 2-1 win over the West Africans.

Last week, World governing body FIFA revealed that that unlike the CHAN tournaments in 2009 and 2011, the event in South Africa will receive full ‘A’ game status.

This means that all Cranes players will officially earn caps for every game played.