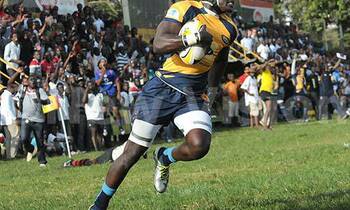 Heathens team captain Michael Wokorach in an interview after training on Tuesday evening said that, they are still confident of retaining the trophy.

“We only need to win all our games with a bonus point a before we face off Kobs in the decider game,” Wokorach stated.

Heathens are second on the table with 28 points while DMark Kobs are 34points.

Heathen’s visits stubborn Sadolin Mongers at the house of pain in Entebbe while DMark Kobs face Mutoni Warriors at Legends Rugby Club and Toyota Buffaloes host Lira Bulls that are yet to win any game this season.

The Nile Special Premier Rugby League resumes on Saturday with the second round with four games on card as the struggling G4S Pirates aims to avenge a 29-25 first round defeat against Ezee Money Rhinos.

Stand in team captain Eric Butime in an interviews said that it was complacence that caused their defeat last time a mistake the players are not ready to repeat.

“We had a bad back line but the return of Greg Lukendo at centre, Ivan Magomu in the fly half, Isaac Rujumba has strengthen us more am confident victory is on our side,” Butime stated.

“We have got new blood from schools and were baptised in the previous two games making them fit to handle the pressure,” Butime added.

Pirates will however miss the services of their lethal 8th man Marvin Odong who has not yet fully recovered from Injury and is also busy with academic exams at Makerere University.

However, Rhinos club captain Martial Tchumcan when contacted said,” We are ready and we are coming for victory.”