International Organization of Migration (IOM) reveals that at least 2,360 migrants died this year. 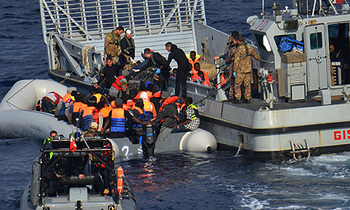 The International Organization of Migration (IOM) has revealed that at least 2,360 people died this year while attempting to move to foreign countries.

The global body’s director general, William Lacy Swing, in a statement, noted that 2013 may have been the costliest year on record in terms of lives lost, for migrants seeking to cross international borders clandestinely.

“We will never know the true total, as many migrants died anonymously in deserts, in oceans or in other accidents,” she said.

IOM warned that unless the international community took decisive action to address the causes of irregular migration, more migrant lives will be lost at the hands of human smugglers and traffickers.

Their figures show that at least 2,360 migrants have died in 2013 while chasing the dream of a new life, however much potential danger stands in their way.

“These people are desperate,” said Swing, “not even a very real fear of death prevents them from making their journey.”

The Mediterranean island of Lampedusa, the Caribbean, and the seas off Thailand and Indonesia were cited as areas that have seen tragedies involving overloaded, un-seaworthy vessels going down resulting in the deaths of scores of migrants.

The US-Mexico border area and the desert route from West Africa to Libya emerged as the most dangerous land routes.

Here, migrants died in train accidents and also due to thirst. Others were reportedly murdered during their journeys.

The world marked the International Migrants Day on Wednesday, a day dedicated to highlight the wellbeing and safety of migrants.

The global migration body called for the strengthening of existing policies or developing new ones to protect the human rights of migrants.

But it warns that the doors of previously-welcoming countries were increasingly being shut on the poorest, most desperate migrants.

IOM observed a direct link between tighter border controls and increases in people smuggling, which is now a $35b (about sh88trillion) a year business.

“It’s time to take action and save the lives of migrants who would otherwise die while taking desperate measures to cross increasingly restrictive borders,” Swing said.

“We are calling for measures to enable employers in countries with labour shortages to access potential migrants to work and we need to ensure that these people are not exploited or exposed to gender based violence.

“We need a whole-of-government, whole-of-society approach in the best interests of countries, communities and people, in particular migrants themselves.”

IOM also revealed that conflict and natural disasters were adding to the number of people on the move.

Their statistics indicate that some 5,000 people a day left the Central Philippines following typhoon Haiyan last month. A further 100,000 reportedly fled fighting in the Central African Republic in the first half of December.