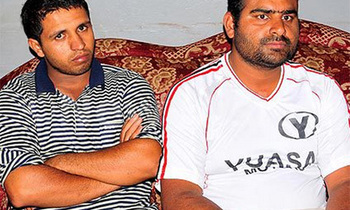 Court presided over by grade one magistrate Sarah Langa issued the arrest warrant against Zaheer Muhammed and Sadiq Muhammad on Friday. The two suspects were charged in absentia and are still being hunted by the police.

Uganda police together with other security agencies recently released public photographs of the two suspects.

Ahmed Asahaporo, 31 and Muhammed Wagasa, 23 connected to the rape case are already on remand pending the on-going investigations.

The four Pakistan nationals were charged with gang rape and performing sexual act against the order of nature.

Clad in white and black t-shirts, the two suspects who appeared in court looked on pensively, as they stood in the dock where state prosecutor Grace Tushabe called for adjournment of the case due to incomplete investigations.

According to Pakistan Community Association ex-chairman Tariq Javed, they have been denied to see the girl.

He told court that they wanted to extend their assistance in terms of medication and other services.

“We have tried to access the premises where the girl is being kept but we have been denied the chance to see her and yet we wanted to help her,” he added.

Prosecution alleges that the suspects committed the offence between December last year and July this year.

It further alleges that the suspects at their home in Kiwatule gang-raped and performed sexual act against the order of nature with the 23-year-old house maid.

The suspects were arrested last month at dawn from their home in Kiwatule after the woman lodged a complaint with police.

The magistrate adjourned the case to November 25, 2013 when the two suspects will reappear in court for mention.