Government forces said they captured the rebel stronghold of Rutshuru on Sunday in a third day of fierce fighting in eastern Democratic Republic of Congo in which one U.N. peacekeeper was killed and another injured. 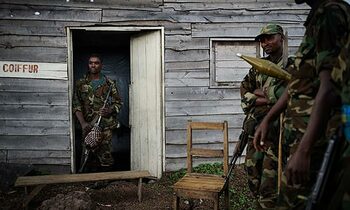 KINSHASA - Government forces said they captured the rebel stronghold of Rutshuru on Sunday in a third day of fierce fighting in eastern Democratic Republic of Congo in which one U.N. peacekeeper was killed and another injured.

Following two months of relative calm in the region, fighting flared on Friday after peace talks in neighbouring Uganda broke down when M23 rebels demanded a full amnesty for their leaders. President Joseph Kabila last week ruled out a blanket pardon.

Three days of victories by government forces have raised the prospect that the army could defeat Congo's most important rebel group, ending a 20-month uprising which has displaced tens of thousands of people.

Army spokesman Colonel Olivier Hamuli told U.N. radio Okapi on Sunday that government forces had recaptured Rutshuru, some 70 km (43 miles) north of Goma, the largest city in eastern Congo. Rutshuru had been taken by the rebels just over a year ago and was serving as a regional base.

The army, which is attacking the rebel enclave in north Kivu province from the north and south, took the town of Kiwanja earlier on Sunday, a day after wresting the strategic outpost of Kibumba on the Rwandan border.

"We are consolidating the zones we have conquered," Hamuli had earlier told Reuters. He refused to discuss rebel requests for a return to peace talks in Kampala, saying: "We will continue to do our jobs as soldiers."

M23 said in a statement on Sunday it had withdrawn its troops from Kiwanja, accusing the army of sending in fighters in civilian clothing to try to draw U.N. troops into the conflict.

M23 threatened to withdraw its delegation from the stalled peace talks in Kampala unless there was an immediate end to hostilities. It said it would then launch a large-scale counter-offensive.

The U.N. mission in Congo (MONUSCO) said the Tanzanian peacekeeper was killed during fighting with M23 in Kiwanja.

"The soldier died while protecting the people of Kiwanja," Martin Kobler, the head of MONUSCO, said in a statement. The previous round of clashes between the army and rebels in late August killed at least two Tanzanian peacekeepers.

Rwanda, which denies U.N. experts' allegations that it supports the rebels, said on Friday that Congolese army shells had landed in its territory, raising fears of a regional conflict.

Congo's army, supported by a new U.N. intervention brigade, scored its first victories against the rebel movement, which has been fighting for nearly two years, in late August, forcing the rebels away from Goma.

The U.N. brigade has a tough new mandate to eliminate armed groups in the eastern provinces, though it has not been involved in the past three days of fighting.

The support of the brigade and the weakening of the rebels has fuelled belief that Congo's army - notoriously disorganised, undisciplined and under-supplied - could defeat M23.

Army sources told Reuters reporters in Goma that M23 had been weakened by desertions, with some 40 rebels taking advantage of a corridor created by the government troops to allow then to flee rebel lines.

M23 began in early 2012 as a mutiny by soldiers demanding the government implement the terms of a 2009 peace deal signed with a previous Rwanda-backed rebel group, many of whose members had been integrated into the army.

Army spokesman Hamuli said some M23 fighters had fled towards the Rwandan border in the face of the army advance.

"There are small pockets of M23 resistance in the hills near Rwanda," he said. "We think Rwanda has to prove its good faith and oblige M23 to disarm, or disarm them itself."